We have just returned from a great week in Namatumba.  This is a small village west of Kampala and about 40 minutes out into the rural areas (Nat Geo Africa) around Mityana. 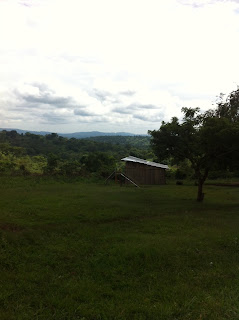 We did school children screening on Monday and Tuesday, seeing about 300 patients.  On Wednesday, we provided health education to the parents of the school children.

We stayed in a hotel in Mityana.  There were two other groups from the US staying there.  We got to know them a little and were introduced to the work that they were doing.  One team, that was from New York, was doing a medical clinic in Mityana.  One of their group approached me this morning and asked me if I was "the doctor".  I guess my grey hair and frown lines gave me away!  She said that their team had met a young boy, named Joseph, the day before in their clinic.  He was noted to have a mass or swelling in his face.  They did not know exactly how to proceed and had come to me for advice.  Since we had a short day today, I asked them to find Joseph and bring him back to their clinic.  Our team would then stop by their clinic on our way back to Kampala.

They were able to find Joseph and he was at the clinic when we arrived.  His father, a widower for almost a year, has 4 children, the youngest of which is Joseph.  Joseph had a "swelling" on his face noted about 9-10 months ago.  It was "treated" a couple of times by local health facilities.  Eventually, he was given a diagnosis of cancer and a biopsy was recommended.  His father could not afford the 100,000 shillings ($40) that was needed.  So the mass has continued to grow.  At first look, we felt like Joseph was one of our "starfish" that God had placed on our beach. 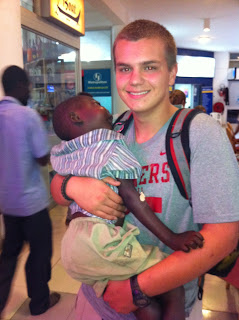 He had a palpable mass below the R eye, that caused some bulging of the eye (much less than Jamil, but noticeable).  The mass could be noticed on the L cheek as well.  Lymph nodes were swollen under the jaw on the left and right.  We had such a short day planned on Wednesday, that we were not sure why we spent an extra night in the hotel, but God quickly showed us why we were in Mityana on Wednesday!  We had one seat left in our van, so we offered to take Joseph and his father back with us to Kampala.  The team from New York made plans to care for the other 3 kids that would be left at home.

When we arrived back in Kampala, David dropped Jared and I, along with Joseph and his father, at the imaging center.  We should get frequent flyer miles there.  We got a CT of his head and sinuses.  We did not get good news.  The radiologist came out and told me that he had never seen anything like this before (never a good to be the first for a 50 year old radiologist).  He thinks that it is a malignant tumor arising from the sinuses, but he says it could be a fungal infection that is spreading and destroying bone.  He has seen fungal infections like this before, but only in adults.  I asked the radiologist for a referral of a good ENT surgeon.  He gave me several, but only one had a phone number in the doctor book that the imaging center had.  So I called Dr Tumweheire Greg, on his cell phone, at 8:00pm.  He answered and I proceeded to tell him the story.  He offered to see Joseph at his Mulago office at 9:30 am in the morning.

So Joseph, Ellya (his father), and our friend David are having a sleep over with us tonight.  David was gracious to stay with us to allow us to communicate with our new friends.  They only speak Luganda.

Please hit your knees for Joseph.  Pray for a miracle for this beautiful 5 year old boy. 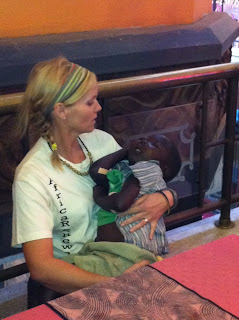 It appears that the second best prayer is that it be a fungal infection that could be cleaned out, then treated with anti-fungal medicines.  I am concerned that if it is a tumor, there will be no way to resect it.

I will update as I have more information.

Thank you for your prayers.  We are leaning on God.  This could be a tough one.

Jay
Posted by due unto others at 1:13 PM