We are excited as we make our final preparations for our upcoming mission to Uganda.  There are just 3 weeks until we take off.  We will be hosting multiple clinics, treating a multitude of medical problems and looking for older Ugandans with cataracts.  Following these clinics, we will host a week at the eye hospital to allow the patients with cataracts to get them removed.


We are also more than excited to tell you about an awesome opportunity for Due Unto Others and our projects in Uganda.  There is a donor to Due Unto Others that has offered us a tremendous opportunity to expand our efforts and to be good stewards of the blessings that God has given us.  This anonymous donor will match all contributions to Due Unto Others between now and when we leave for our trip, May 17.


So any donation will go twice as far!  $55 for one eye surgery turns into two.  $250 for one trunk of medications turns into two trunks of medicine.  $2 for a pair of reading glasses turns into two pair of glasses.  If you have ever considered giving to our mission projects, this is a great time.


As another piece of good news, our paypal account for Due Unto Others is now working.  You can make a tax deductible donation by paypal by directing it to DueUnto @gmail.com or by following the support link on our website www.DueUnto.com.  (please leave your address for tax receipt)  You can make a donation by check to:

Posted by due unto others at 7:38 PM No comments:

How will we be known?

First of all, I apologize for not making an entry to this blog in the past 14 months.  I have been out of the blog business, since we haven’t made a trip to Uganda in about that time frame.  We are going to Uganda in May and I will tell you more about that later.

This week has brought back many memories and has been a bit emotional for me.  One night last week, my parents, siblings and various other family members met at my grandmother’s house to clean out her attic and storage building.  My Granny Due moved to an assisted living in 2016 and we are preparing to sell the house that she and my Grampus bought in 1980.  My Grampus died in May of 1987, but my Granny continued to live there alone since then.  Many things in the attic and storage building had pretty much gone untouched since 1987.  It is hard to believe that it has been almost 30 years.

We found some really cool stuff in the clean out.  Like recruiting letters written to my Uncle Terry Due, asking him to play basketball at different universities.  One was from Army and Assistant Coach Bob Knight.  Another from Oklahoma State and Coach Henry Iba.  Terry eventually made the “correct” choice and played basketball at OU.  We found home crafted telescopes, antique tools, and small desk top cannon, in case we ever need one.  The junk in the attic was carried to the curb and to dumpsters.  The awesome treasures were taken to family homes to pour over or display on a prominent shelf.  This unearthing of these cool family artifacts had me thinking about my grandfather (Elmer Due) and Due Unto Others.  I was also contemplating how I might lead the latter to be more like the former.  As I think about my grandfather, it is easy to see that I need more Due in me and more Due in Due Unto Others.

The great American philosopher and comedian, Ron White, once said that his grandfather always said that his grandson “Had a whole lot of quit in him”.  To tell you the truth, I would like to have less quit and more Due in me.  To bring this point home, let me describe some of the memories and qualities, of my grandfather, that came back to me this week.

He was patient.  Oh my goodness was he patient.  I never saw him lose his temper once in my 16 years with him.  I think this quality may have fed into many of the other great qualities.

He was gentle.  He was former military and a machinist, but very gentle.  I remember one time that he sat with his dying friend and held his hand for hours.  His friend twisted Grampus’ watch around so many times that he had a big scab wound on his wrist. 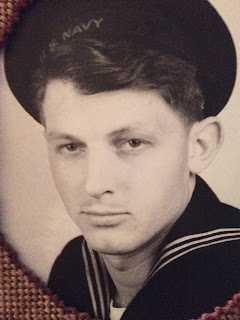 He was a hard worker.  He worked for 30 years and retired from Halliburton.  On his off time, he made arts and crafts to sell, coached baseball, taught Sunday school, sang in the choir, kept a big garden, played multiple musical instruments and led music/bible study at local nursing homes.  When his work mates at Halliburton went on strike, he could not put is family at risk, so he crossed the picket lines (enduring insults and injury) to keep working.  He would sneak his paycheck home in his lunchbox so that the people on the picket line would not see it.


He was honest.  I remember one time that I was telling him the story about my trip to Burger King.  I had bought my meal, and somehow, the cashier made a mistake in counting back my money.  I was celebrating my windfall, but he gently pointed out to me that me taking that money was not right.  That weighed heavy on my mind.  He would probably be disappointed to know, but as a high school student, I was too embarrassed to go back to Burger King and give back the $5.36.  So there you have it, Burger King, I owe you $5.36 from 1986.

He was innovative.  I mentioned the homemade telescope and cannon earlier.  He could make anything out of nothing + junk.

He had a unique approach to things.  One time while my parents were out of town, we were staying with my grandparents.  He thought it would be a good idea, at 5 years old, for me to try his chewing tobacco.  I still remember how mad my mom got at him, but after I got done throwing up all over his backyard, I had formed my negative opinion about tobacco.

Our church is in the middle of a message series entitled “This is what we do.”  We are reviewing some of the things that we do as Christians.

Matthew 7:16 says, “By their fruits you will recognize them.”  Our fruits are our actions.

Colossians 3:23-24 says, “...don’t just do the minimum that will get you by. Do your best. Work from the heart for your real Master, for God, confident that you’ll get paid in full when you come into your inheritance.

I am in the process of deciding what our theme will be for our upcoming Uganda mission trip.  I am thinking about “borrowing” the title from our church message series and making it our own.  This is what we “Due”.  Being kind-Being Generous-Working hard-Being Honest-Being Patient-Loving Others…..This is what we Due.

Please lift our team up in your prayers.  We are leaving for Uganda on May 17 and we will be returning home on June 28.  We will be hosting general medical clinics, as well as finding people with cataracts and helping them get them removed.  At every clinic, patients see Jesus in the team and hear the Gospel presented.  Please pray that God be glorified in all of our activities.  If you would like to donate towards the medical clinics and cataract surgeries, you can send a tax deductible check to:

My life is often cluttered with things that need to be cleaned out of the attic and dragged to the curb.  But buried in there are things that are important.  Once I remove the clutter and then dust off the things in my life that matter, I want to place those things on a prominent shelf.  I want to Due more for others.  I want to be more patient, kind, hard-working, loving, gentle and kind.  I want God to recognize me because, those things are what I Due.