I’ve heard it said that it is darkest right before the dawn.  I am not sure if that is true.  It seems like dark is dark.  I think that the saying is true for a woman, in Uganda, that we had told you about previously.  Grace is an incredibly strong woman.  She is the wife of a pastor that was recently (September) struck by lightning and died.  She was left with 10 children that she is taking care of.  Some of them are hers by birth, some of them she has taken in.  They range in age from 13-17. 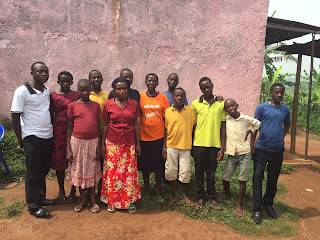 That seems like a high hurdle to clear.  But it gets darker.

We had known about Grace and her plight for a few weeks.  We had mentioned her in this blog.  We had arranged for our friend Cate to come to Mbarara, while we were there, to help us minister to Grace.  We felt that Cate was uniquely qualified as her husband was a preacher before he passed away, at a young age, leaving Cate with 2 young children.  When we arrived in Mbarara on Friday, we found out that Grace was in………PRISON.  That’s right.  The woman that God had laid on our hearts was in prison.  What could the widowed preacher’s wife done to deserve prison?  It seems that Grace and her husband had joined with several people to take out a group loan.  Grace was slowly making her payments and still owed 20,000 shillings (about 6 dollars).  The group, however, still owed 6 million shillings ($2,000) and some in the group were not making their payments.  The whole group was responsible for the loan, so since the group was in default, they all were arrested last Monday (December 7th). 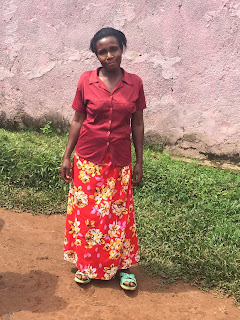 So Grace was not only widowed and trying to raise 10 children, she had now been in jail with her kids at home for 5 days.  Our friend, Pastor Joseph, was able to inquire about Grace and was told that it would take 2 million shillings (about $650) to gain her release, even though she only owed 20,000 shillings.  Even this could not be done until Monday the 14th.  We were heart-broken for this lady.  Just when things seemed dark, it seemed like this blow could leave her without hope.

This whole situation was heavy on my heart all weekend.  I woke up very early on Sunday morning thinking about this lady and her situation.  It seemed like God gave me the word “pilgrim” in my heart.  I was not sure what that meant, but I was sure that God had placed it on my heart about Grace and her situation.  As I did some research, I came up with several definitions, but wondered how they applied.

On Monday, Pastor Joseph was able to hire an attorney and gain her freedom without paying the entire 2 million shillings.  Today, Tuesday, Jill and Cate were able to go and visit Grace and her family at their home.  As they talked with her, they found out that Grace had not lost hope.  She had taken the “opportunity” of being in jail to be an evangelist to the other women there.  Despite her circumstances and despite the dark valley she was traveling through, she was preaching the love of Jesus.  Wow!  We had come with intent of ministering to her and she had given us a great example of ministering to others.  With this information, my “pilgrim revelation” seemed to make more sense.  One definition of pilgrim is a person that is traveling in a foreign place.  I think prison was a foreign place for Grace.  The people there were not like her.

As I had stated in the previous blog, we had hoped to raise enough money to help the widow with school fees for her children, potentially buying a plot of land and constructing a house.  We had started towards that goal, but we had to use some of the funds to get her out of prison.  The next set back was that she has many more children than the 3 that we thought she was caring for.  Even though the project has become bigger, we feel that God can use us to help this amazing Grace in her time of need.

So we are still fund raising with the following goals in mind:

1.)    Raising funds for school fees for those children still attending school.  We will post pictures, names and a link to how you could sponsor one of these children for their school fees.

2.)    Raising funds to purchase a plot of land.  The way we understand it at this time, we can find a small plot of land for about $2,000 (that is US dollars).  We have been made aware of a plot of land that is 2 acres in size and already has a “plantation” of banana trees on it for about $9,000.  This is obviously a big amount of money, but it would be something that could provide some sustainable income.


3.)    Raising funds to help in the construction of a home.  This might be less than my original estimate of $5,000.  Some local churches and pastors might be able to donate labor and supplies to help with the construction.  The family also does already have a few construction supplies and metal sheets to make a roof.

Please continue to pray for Grace and her family.   If you would like to give toward any of these projects specifically or towards the eye projects, please contact me:  DueUnto@gmail.com