The parable of the lost cow?


As I sit to write this blog, I feel a little rusty.  As well I should, I have not posted a blog since August 28th.  We have gotten back into the swing of things in Oklahoma and have been catching up on some things at our ranch.   A couple of weeks ago, we were looking at some things with our building contractor who is doing some renovation of our house, when a guy from the oil company came up.  This fellow drives his truck around and checks the oil pumps for the oil company.  He asked me if the cattle around this place were mine.  I reluctantly said yes, as I feared that he was about to tell me something that they had messed up.  He said that he had noticed a cow in the body of water formally known as our lake (now a large puddle) and he was afraid that she was stuck.  I thanked him and headed off to retrieve her with a rope, a 4-wheeler and a whole bucket of naivety.  This is what I found when I got down to the cow. 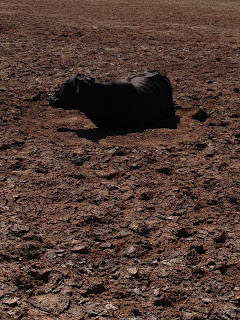 I can’t figure out how she sunk so deep in this dirt.  There were no deep tracks leading up to her, just her up to her chest in the mud/dirt.  I quickly realized that I was not going to pull her out with a rope and a 4-wheeler, so I went back to the house to get a shovel.  Surely if I could dig out around her legs, she would step up out of there and walk to safety and be eternally grateful.  Well I dug for about 30 minutes and then tried to pull the cow’s tail to get her going but she was completely exhausted.  I am quite a green (lack of experience, not so much environmentally radical) rancher, but I have heard horror stories about people getting things stuck in their “dry” ponds.  So I was hesitant to bring any equipment down into this area.  Simon, our building contractor and his nephew Felix, graciously offered to help us to free the cow.  We realized that digging and pulling was not going to work, so Simon thought we could dig under the cow, wrap some straps around her, and lift her out with the tractor.  I reluctantly went to get the tractor, fearing that we would have to have a helicopter to get the tractor out.

Simon’s plan worked perfectly, as I lifted the cow right up out of the hole and started to back up.  Then… the tractor sunk to its axels. 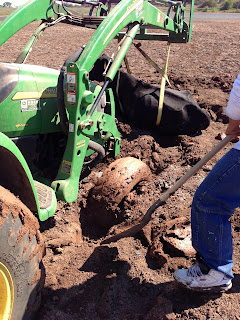 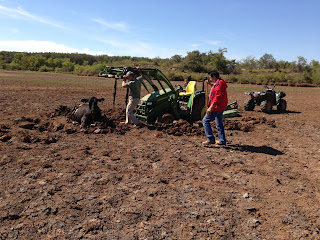 This is a 4 wheel drive tractor with big treads, and it was going nowhere but down.  I sat the cow down (out of the hole) and she made absolutely no effort to get up. 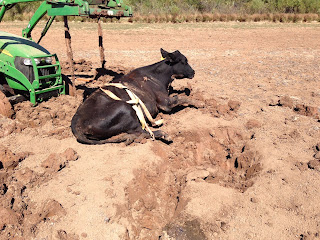 We spent about 3 hours using rocks, boards, pieces of sheet metal and the front end loader to try to get the tractor out, but we had only moved it about 8 feet.  So Simon had another great idea, we just needed to bring the 4-wheel drive pickup down to pull out the tractor.  I had been arguing with him about this while we dug and worked on the tractor.  Finally, I had no better ideas, and figured the helicopter could get out a tractor and a pick up just about as easily as the tractor alone.  So I went to get the pickup.  We used a long tow strap and kept the pickup as far as we could towards the side of the lake bed.  We were able to pull the tractor out.

I then circled the tractor around, tied onto the cow’s straps, and literally drug her to the edge of the lake and stopped.
I brought her food and water, and she immediately began to eat.  This made me feel better, because I knew that if she was thinking about passing away, she would not be eating.  We left her there and left to return to Duncan.  The next morning, I went back to check on her and found this. 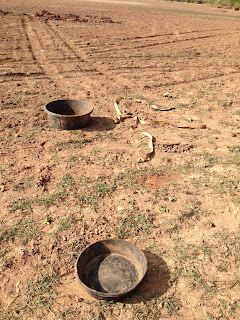 And after a little time of searching, I found this! 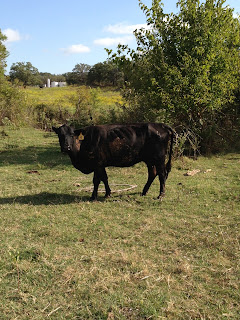 This whole scenario was a little scary and somehow comical.  As I thought about that cow, it reminded me of the parable of the lost sheep in Luke.  Luke 15:4-6 says, “Suppose one of you has a hundred sheep and loses one of them.  Doesn’t he leave the ninety-nine in the open country and go after the lost sheep until he finds it? 5. And when he finds it, he joyfully puts it on his shoulders 6 and goes home.  Then he calls his friends and neighbors together and says, ‘rejoice with me; I have found my lost sheep’.”

One of our special friends in Uganda recently passed away.  Young Joseph, from Mytiana, has gone to see Jesus.  Joseph had a significant facial cancer and long odds against living.  Through the giving of Due Unto Others supporters, Joseph was able to receive chemotherapy and we thought that he was improving. 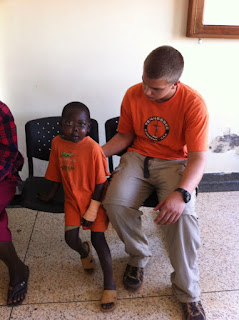 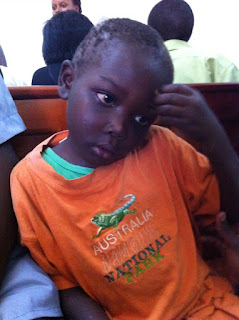 I don’t know the specifics of what happen, but I do know this.  Joseph was young enough that he is in Heaven.  Please pray for his father Ellya and for Ellya’s remaining children.  We have felt like our role in Joseph’s life was perhaps to reach Ellya for the Lord.  We tried to show God’s love to this family, but we know that they have gone through much heartache in the past year, that only God can break through.

One in five Ugandan children dies before their 5th birthday.  What if we reached that One!
Jay