You've got to have a "Little Faith"!

It is time for a long overdue introduction.  I would like for you to meet Faith.  She is the Programs Manager of the Renewal Healthcare Network (RHN).  We accuse her of being the “Big Boss” but she runs from this title.  Originally from Nansana, Faith now lives in Gaba and has her office in Wentz Medical Center.  She has planned each of our mission trips and made arrangements for us to stay in hotels, get fed, and have partners to help us when we arrive.  She went to University at Makere and obtained a degree in Developmental studies.  She also went on to get a Masters in Public Health and Counseling.  She has been a part of the Renewal  Healthcare Network for 5 years now.
When I asked one of her friends what she likes the most about Faith, Julia replied, her character.  We like that too, but what I like the most is that she does not take any slack from anyone!  Let me give you a little story to show you what I mean. 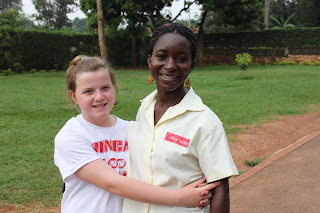 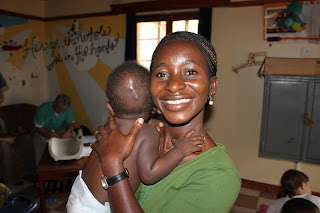 At the end of our first day in Namuwongo, probably the worst slum area that we have worked in since we arrived, we were trying to drive out of the area in our van.  The path (not a street) was very narrow and lined on each side by shops or houses.  We were doing ok until we rounded a corner and there was a dump truck coming the other way.  I was soooooo glad that David was driving!  We inched, literally, along to try to get past the truck.  We pulled the mirrors in and missed structures and the truck by centimeters.  When we were almost clear, a group on the passenger side of the van, started throwing a fit, yelling “you pay”.  It seems that we had run over some of a lady’s matooke bananas that she was selling along the path.  They caused such a commotion that quickly there were 10-12 villagers coming up to see what was going on.  David got out to go see what had happened and discuss this with the upset people.  After a few minutes of David arguing his case against the gang of villagers, Faith said, ”let me out”.  So all 5’0” and100 lbs of her got out of the van.  She quickly figured out that the lady wanted us to pay 25,000 shillings ($10) for the matooke that we had damaged.  Faith got down on the ground and searched through the matooke and found 4 bananas that had been damage.  She gave the lady 500 shillings (20 cents) and we loaded up and drove off.  This was stuff that legends are made of.  All of us muzungus were quite relieved that she saved the day, and I think that, secretly, David was too!
I have heard many times, that “Faith” can move mountains, but now I believe this, because I have met her!  We are glad that when we go out as the Due Unto/RHN team, “Faith” is on our side!
Posted by due unto others at 1:05 PM