They went across the lake to the region of the Gerasenes.[a] 2 When Jesus got out of the boat, a man with an impure spirit came from the tombs to meet him. 3 This man lived in the tombs, and no one could bind him anymore, not even with a chain. 4 For he had often been chained hand and foot, but he tore the chains apart and broke the irons on his feet. No one was strong enough to subdue him. 5 Night and day among the tombs and in the hills he would cry out and cut himself with stones.
6 When he saw Jesus from a distance, he ran and fell on his knees in front of him. 7 He shouted at the top of his voice, “What do you want with me, Jesus, Son of the Most High God? In God’s name don’t torture me!” 8 For Jesus had said to him, “Come out of this man, you impure spirit!”
9 Then Jesus asked him, “What is your name?”
“My name is Legion,” he replied, “for we are many.” 10 And he begged Jesus again and again not to send them out of the area.
11 A large herd of pigs was feeding on the nearby hillside. 12 The demons begged Jesus, “Send us among the pigs; allow us to go into them.” 13 He gave them permission, and the impure spirits came out and went into the pigs. The herd, about two thousand in number, rushed down the steep bank into the lake and were drowned.

14 Those tending the pigs ran off and reported this in the town and countryside, and the people went out to see what had happened. 15 When they came to Jesus, they saw the man who had been possessed by the legion of demons, sitting there, dressed and in his right mind; and they were afraid. 16 Those who had seen it told the people what had happened to the demon-possessed man—and told about the pigs as well. 17 Then the people began to plead with Jesus to leave their region.


18 As Jesus was getting into the boat, the man who had been demon-possessed begged to go with him. 19 Jesus did not let him, but said, “Go home to your own people and tell them how much the Lord has done for you, and how he has had mercy on you.” 20 So the man went away and began to tell in the Decapolis[b] how much Jesus had done for him. And all the people were amazed.

It is Wednesday evening here in Jinja, Uganda.  We started our day this morning early.  Our team gathered for breakfast and our morning “Devo”.  No one had been specifically assigned to lead the devo this morning, so we weren’t sure exactly how it would go.  While sleeping last night, I had a dream about the pigs at our ranch drowning.  When I woke this morning, God brought this passage, in Mark, to my mind.  If you have read any of my blog posts in the past, you know that I am not a biblical theologian.  So the devo I lead this morning and what I am about to share with you may seem extremely bizarre to you.

Through our discussions with Jamil, over the past weeks and months, we have come to find out that Jamil received some significant teasing, related to his eye, while at school.  This even after the tumor had been removed and with his right eye remaining permanently closed.  Jill and I have encouraged him to turn this source of ridicule into his badge of honor for Jesus.  His eye is a testimony to God’s mercy and power in his life.

When he starts to school this next week, it will officially be the second term (out of three) for the 2015 school year in Uganda.  He will be joining a class where most of the students were already there for term one.  Since he will be a “new student”, he will be asked to introduce himself to the class.  We are going to be coaching and encouraging him to share is life story with the class.  We feel that this will provide a great platform for him to share Christ with others.

Today, when we took Jamil back to his home in Pallisa, Pastor Jonathan Kabanda asked for 10 minutes to talk to the people that had gathered to see why the Mzungus had come to the village.  Jonathan asked Jamil to stand.  Then in the local language, shared Jamil’s story of God’s healing, provision, and grace.  He talked to the gathered crowd about Jesus and His power.  When he was finished, 19 people raised their hand to accept Christ and then prayed a prayer of salvation. 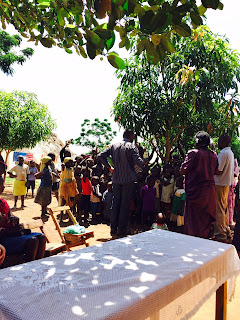 If this didn’t prove a point to Jamil, he must not be paying attention!

So in this story in Mark, Jesus finds a man that was possessed by a Legion of demons.  This man scared the local people and they wanted nothing to do with him.  After Jesus casted out the Legion of demons, the man was found to be sitting there and in his right mind.  He was acting normal as though nothing had happened.  Then as Jesus was getting ready to leave, the man who had been possessed, asked to go with Jesus.  But Jesus said,  “Go home to your own people and tell them how much the Lord has done for you, and how he has had mercy on you.”  In verse 20 it says “So the man went away and began to tell in the Decapolis[b] how much Jesus had done for him. And all the people were amazed.”

God impressed on me how much this man who was healed by Jesus had in common with Jamil.  Jamil had been shunned by his village.  With his large eye tumor, the villagers felt that he was cursed.  They would not allow him to be in school because his eye and the way it protruded, scared the other children.  He was an outcast. 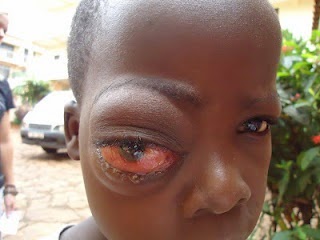 Then Jesus caused a chain of events to happen.

1.)    A traveling evangelist saw Jamil while holding a crusade in Jamil’s village.  This was at the same time that Jamil gave his life to Christ.


2.)    That traveling evangelist also takes jobs as a driver to make money to support his ministry.  This driver/evangelist was hired by a medical missions team from Oklahoma to drive them on a few missions.


3.)    The evangelist and the mission team from Oklahoma became friends and he told the team about a boy with an “eye problem” that he had seen out in Pallisa.


5.)    People from all over the world, but especially Duncan, Oklahoma, raised funds for Jamil to have 2 separate eye surgeries and radiation.


6.)    God provided for Jamil to go to the USA for a final diagnosis and ultimate plan of action.

God has caused a healing in Jamil and if Jamil has on his sunglasses, you would not know that he has ever had a medical problem. 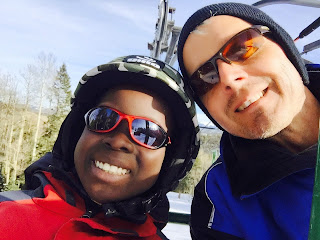 The people, especially in Pallisa that knew him before, are AMAZED at what God has done in Jamil’s life.  Though we may want Jamil to return with us to the USA and Jamil may want to go with us, we feel that God has commissioned him to "go home to his own people and tell them how much the Lord has done for him and had mercy on him.

We will continue to encourage Jamil to share his story and through the amazement, he can share Christ with others.
Tomorrow is our first clinic of this year's mission.  We are excited.
Jay
Posted by due unto others at 11:32 AM