I am writing this blog at the risk of sounding like a stalker.  I have twice, on this blog, given you a hint of or a reference to a young girl named Sabina or Sabrina.  Let me tell you the story about her, and forgive me if I sound like some sort of deviant.

When I first went to Uganda, in January of 2011, with a men’s group from Henderson Hills Church in Edmond, we did work in and around Jinja, with Pastor Henry.  This was not a medical trip, but a teaching trip.  Most members of the group had biblical topics, but I taught about HIV and AIDS.  We taught in Jinja and in 2 smaller villages some distance outside of Jinja.  One of these villages was Kiranga.  I was in Kiranga 2 days while on that first trip, and while I was there, I saw a girl with a beautiful smile, and a large umbilical hernia.  I was told that her name was Sabina, but it turns out, her name is Sadiah (say dee uh).  Her beautiful smile and her medical need were frequently brought to my mind as though the Holy Spirit wanted me to make her need my business.
I had a plan to go to Kiranga and try to find Sadiah in some free time that we had at the end of our trip to Uganda last year.  In fact, one of my biggest disappointments in needing to leave early last year was that this special project was postponed.

I spoke with Pastor Henry and he traveled to Kiranga and went with the local pastor, Grace, to find Sadiah, and offer her the gift of surgical repair of her umbilical hernia.  When the two pastors found her home, she was writhing on the floor in abdominal pain.  Her family initially agreed to allow Due Unto Others to facilitate a surgical repair of her problem, but then they became fearful and backed out.  When we scheduled our itinerary for this year, I included 2 days in Jinja and then a full day to have a special project to drive to Kiranga and try to find Sadiah.  Pastor Henry graciously gave up 2 days of medical clinic at his church and scheduled both days of our clinic in Kiranga with Pastor Grace.  When we first arrived at Kiranga, I sent out an APB on Sadiah and told the local leaders that I wanted to talk with her and her family.  Sadiah came to the clinic the first day, but her parents were not available. 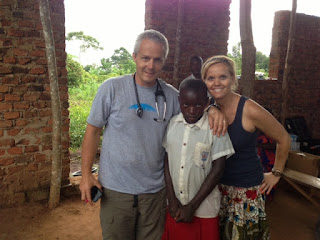 I talked with her and confirmed that despite 30 months passing, she still had the umbilical hernia that needed surgical attention.  She assured me that her parents would be coming the next day.

As we were preparing to leave on the final day, my heart was heavy as I had not seen Sadiah or her parents at the clinic.  As I was making my way to the pit latrine before our bumpy ride back to Jinja, Pastor Henry told me that Sadiah’s parents had arrived!  He had a Luganda conversation with them.  Henry told them that I was concerned that, if not corrected, this hernia could continue to cause her pain and could be quite problematic in her child bearing years.  Once they saw my concern and thought about her current and potential problems, THEY AGREED TO WORK WITH DUE UNTO OTHERS to finally see a positive end to a long term problem!  I am so excited that God has worked this out.


Please keep Sadiah in your prayers.  I will be finding out a price for this procedure and post it later.  If you would want to give towards this project, please let me know.

Jay
Posted by due unto others at 5:15 AM