On our first day in Runkungiri we got to the Health Ministers House, Jared and Kyle were throwing an American football over the wall-like thing that went between the compound and the house. Jared just barely grazed the top of an arch in the wall that turned out to be a bee’s nest. The bees got mad and chased the ball. Kyle didn’t notice all of the bees swarming the ball and caught it. After he caught the ball a couple bees went after him. He then realized the bees and ran screaming like a little girl, while taking off his shirt. I’m just glad it didn’t fly in his pants! Kyle only ended up with one sting on his neck which was probably a good thing because, there were more that were around him. 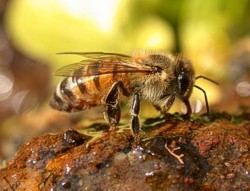 On the second day, in Runkungiri, we were on our way home from the clinic that we were having that day. It was dark, and our van had over heated like so many times before. David pulled over and everybody got out of the van. Jake had his flash light and shined at a tree because, it looked like there were people at the bottom staring at us. Well apparently there was a bee’s nest in the tree and they became angry at the light. I guess they came to investigate, and one of the bees flew up Jared’s shirt. Jared didn’t realize it until it stung him. I didn’t know what was happening because all I heard was an aarrrrhhhggg. I then found out that a bee had stung Jared.


On our third day, in Runkungiri, we had just come back to the guest house after a wedding we were invited to. A lot of us in our group (including me) are terrified of bees, so dad, mom, Jared, Dr. Martin, and I were going to play a prank on everyone else. The plan was when people came into the court yard we were going to scream and flap our arms around acting like bees were swarming us. We saw Jake coming so we started our plan. When we did this Jake took off running like the police were after him. Then, after Jake noticed we were joking he walked into the front door and said that it wasn’t funny.

After we did the prank, the people who were involved were not being very smart and standing under the nest talking. We were talking for a while and then my mom said, “OUCH!!! I think something stung me!” My dad started looking at her arm.  Then Dr. Martin started going crazy and took his parka off. We didn’t know what was happening until he said he got stung by something big. So we went inside (well I ran) to look at what had happened. It turned out a bee had stung Martin’s ear and mom’s arm.

I took a shower after that and went to my mom’s room to get a jacket. I put it on and went into the living room to talk with the pastors that were helping us. I sat there talking and listening, then all of a sudden I felt something fuzzy moving in one of the jacket’s sleeve. I put my hand up it and grab the fuzzy thing and threw it on the ground. I then realized it was the bee that had stung my mom’s arm. Luckily it didn’t have a stinger because, it got my mom first. It was still alive and moving (but not flying). Jared got it and put it on a bottle cap to look at it. The bee fell out and landed on his pants and he freaked out. It was really funny! 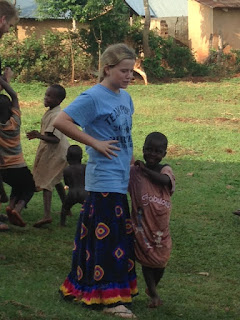 Jayne
Posted by due unto others at 1:40 AM