Making Good out of a Bad Situation

I’ve heard it said that it is darkest right before the dawn.  Now I am not sure that this is true or not, but I have been hunting enough to know that it is coldest right before dawn!  I’ve also seen stories of triumph rising out of tragedy.  With that in mind, I’d like to tell you a story from our trip to Jinja last week.

After finishing our Friday clinic in Kiranga, we headed back to Jinja with our two vans. 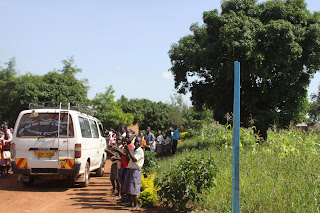 Jonathan Kabanda was driving his van that Due Unto had rented for the week, and I was driving our van, as David had returned to Kampala for an important meeting.  I was sky high as I was thinking about Sadiah and her potential surgical repair of her hernia.  We had traveled about 45 minutes and we were about 20 minutes from Jinja when Jonathan pulled his van over to the side of the road.  His van would not go into gear and feared that his transmission had “jammed”.   Our friend Joseph, Pastor Henry, and Jonathan stayed with the van, and the whole group of 11 mzungus climbed into our van and we continued back to Jinja.  A mobile mechanic came out to the broken van but unsuccessfully tried to repair it.  Pastor Henry called back to Jinja and someone brought Henry his private vehicle and they began to tow the van back to Jinja.  It is evidently unlawful to tow a vehicle, if you are not a licensed tow truck.  So as they passed some traffic police, they were pulled over and detained until they paid a “fee” to allow them to proceed.  They finally arrived back at our hotel at midnight.  The next morning, a mechanic started to work on the van in the hotel parking lot.  I know that it was quite frustrating to Jonathan as all of the money that he had received for working and using his van for the week was consumed in parts and mechanic fees.  This mechanic was a Muslim, and as he worked on the van, Jonathan talked to him about Jesus.  Around 1:00 on Saturday afternoon, the van was repaired.  Jonathan left the mechanic with a Christian tract and we headed back to Kampala.


I know that Jonathan was frustrated, tired, and saddened after this financial set back.  He did not show these emotions however.  What he did do is continue to tell people about Jesus. 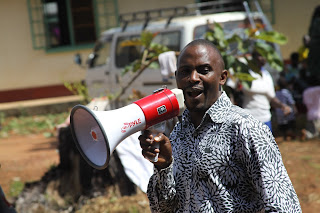 Jonathan received a call on Sunday from the mechanic.  He had some questions for Jonathan about Jesus.  Through these questions, Jonathan was able to lead the Muslim mechanic and his wife to a saving knowledge of Jesus.  This was a good example to me that despite my immediate circumstances, I should continue to do what my God has told me to do.  Through this obedience, He can turn a bad situation into something wonderful!  God slowed us down and changed our plans so that He could add 2 to the list in the Lamb’s Book of Life!
1 in 5 Ugandan children dies before their 5th birthday.  What if we reached That One Person?
Jay
Posted by due unto others at 1:02 AM