Have you ever noticed that sometimes the best things come out of difficult circumstances?  I am sure that each of us can think of examples in world history, American history, Church history, our family history, and even in our personal history. For me personally, some of my best individual accomplishments took quite a bit of training or effort.  Things like running a marathon, completing a half ironman triathlon, and even graduating from medical school.

I’d like to go back to last week and tell you about our clinic in Ishaka.  We were scheduled to work clinics, in a tent, on the property of the soon to open Ishaka Community Church on Thursday and Friday of last week.  Ishaka is a town with a heavy Muslim influence.  There is a private university there that was heavily funded by a Muslim family.  As we set out on our trip to SW Uganda, it was still not clear if we would be “allowed” to host the clinic in Ishaka. The District Health Officer (DHO) said that there had recently been a medical team in the area and that another medical treatment camp was not needed.  It was felt that this rejection was likely related to the fact that it was a Christian medical camp.  After some repeated efforts, the District Health Officer still rejected the request.

Leaders of the church sought counsel with the Municipal Health Officer.  This is a lower ranking official, but closer to the city.  The MHO decided that permission from the DHO was not needed if he, the MHO, approved it.  So we got approval through the MHO on Monday, to host the clinics on Thursday and Friday.  Even as we got up and had our team meeting on Thursday morning, we were still a little uneasy about what the day might hold.

When we arrived in Ishaka, there were many people there waiting on us. 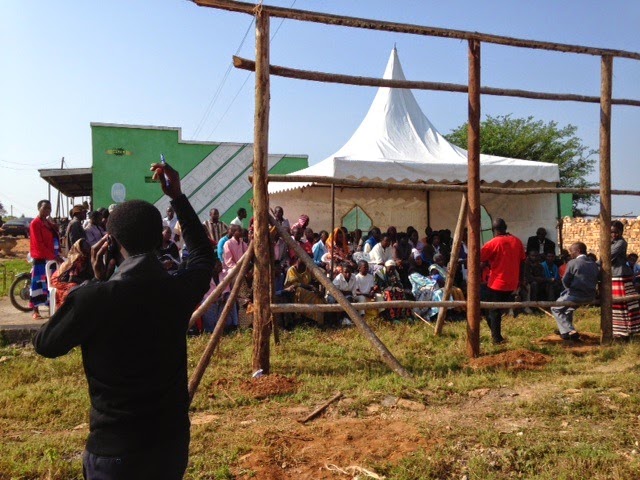 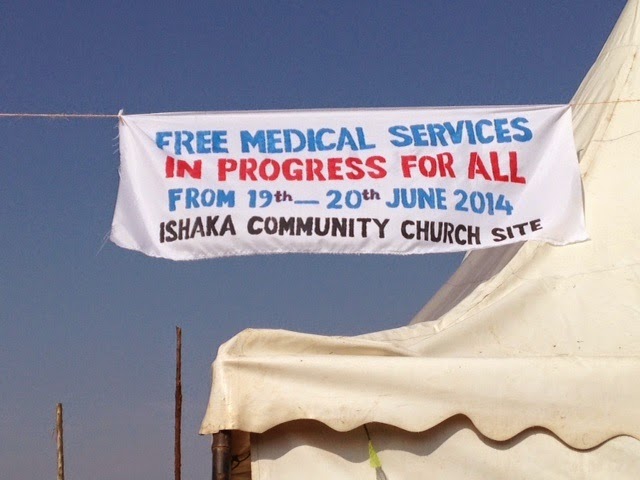 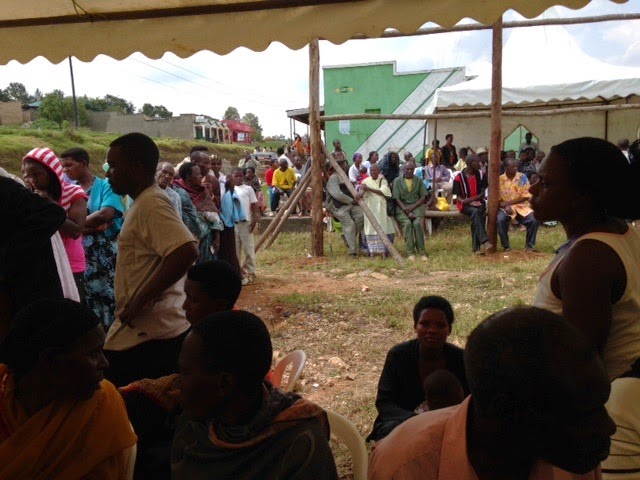 The need for medical care was evident by the number of people waiting, and by the type of patients that we treated.  I noticed that there were two armed police officers at the site of the clinic.  I thought this was a little strange as we do not normally require armed guards for our clinics.  I thought that perhaps the church was being extra cautious due to the circumstances.

We started the clinic and things were going very much like they do at other clinics.  After a few hours it got dark and started to pour down rain.  Since we were in tents, our team had to help hold one side down to keep the tent from blowing over and in on the other tent, we had to use some of the older patient’s walking sticks to lift the roof of the tent, in places, to make the water run off.  The patients all crowded under the tents to get out of the rain.

In the middle of all of this commotion, a small Toyota car pulled up into the middle of the property that we were working on.  They stopped in the middle and started honking their horn.  It made me think that perhaps they were carrying a really sick patient and needed to have some help getting them out of the car.  This would be unusual because almost no one that we treat in our clinics, drives to the clinic.  They almost always walk or arrive by some means of public transport.  I got distracted with the rain and tent and forgot about the Toyota, until they started to drive away and got stuck in the mud of the property.


The rain eventually stopped and we finished a muddy clinic day on Thursday.  We went again on Friday and the crowd was even bigger waiting for us.  That clinic day went well and we treated almost 500 people in those 2 days.

As we were finishing our packing, we were talking with the local pastor.  He indicated that through sharing the Gospel, at the medical clinic, more than 50 people had given their lives to Jesus.  Additionally, the goodwill in the community had been substantial.  The Ishaka Community Church was opening in a little over a week, and they had a full head of steam.

As we drove back to Mbarara, from Ishaka, Dr. Jonathan told us the rest of the story with the Toyota car, the day before.  It seems that the car was full of district officials that had come to shut down the medical clinic.  They had the chief of police with them as well.  When they pulled up to the church site, they pulled in and honked the horn, because they did not want to get out in the rain.  Pastor Sam had gone out to greet them, under an umbrella.  The church leaders had suspected that this might happen, so they had brought all of the letters of permission, with signatures, to the clinic site.  The officials bluntly had told Sam that they had been clear that this event should not take place.  Pastor Sam graciously provided them with the signatures and letters of approval from the MHO.  The officials looked them over and then declared that the law requires on site security for an event with this many people.  Pastor Sam calmly pointed out the 2 police officers that were under the tent.  Stunned by what had just happened, the officials rolled up the window on the Toyota and drove away (after having to maneuver back and forth to get unstuck from the mud).  Seems that God may have used a storm cloud of distraction to keep the officials in their car and to not even allow any of the Due Unto team or clinic patients to know what was going on.  I think that He may have enjoyed a little fun by getting the Toyota stuck in the mud!

There had been great opposition to a Christian medical clinic in Ishaka.  Through prayerful persistence, the leaders of Ishaka Community Church boldly pushed forward.  Our team was a little skeptical, as we had never been “unwanted” in a town or village.  We boldly stepped out and went to where we felt God was telling us to go.  As God helped everything unfold, we had one of our most successful clinic ever.  It was a success in the number of people saved and in the severity of illness that we were able to help with.  Despite what the DHO thought, this clinic was needed, both spiritually and physically.

Do you remember those police offers that had been hired? 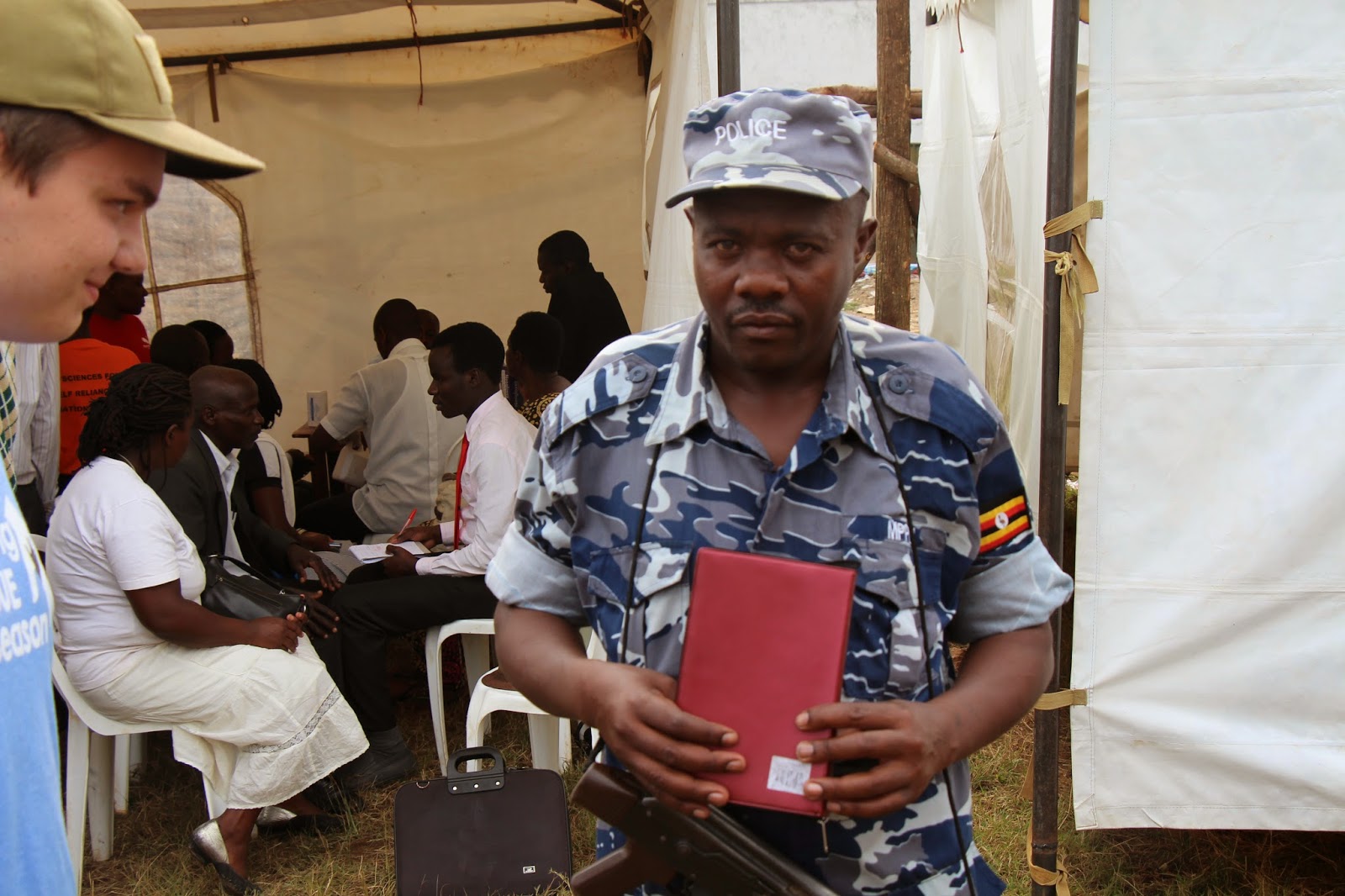 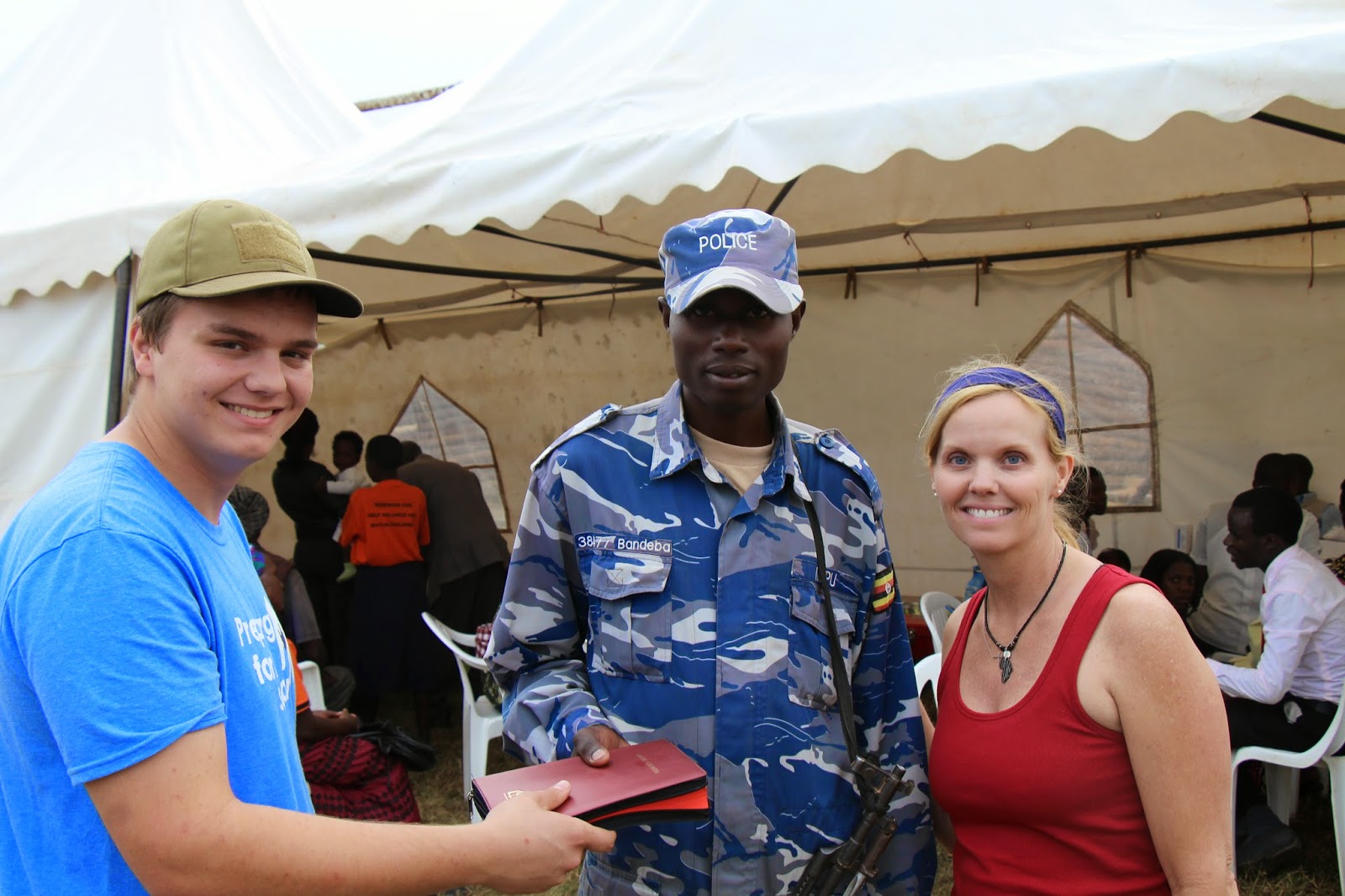 Their presence not only allowed Pastor Sam to stand up to the District Officials, but one of them prayed to receive Jesus!  The other officer was already born again.  We were able to provide them both with copies of God’s word, in their local language.  The officer that had just been saved proudly stated that he would be the first member of the Ishaka Community Church!

When you find yourself in a tough situation or heading into the storm clouds of an unknown and potentially difficult environment, remember to be prayerfully persistent.  Just out the other side of the storm cloud might be the rainbow of God’s great blessing!
Continuing to prepare for Due Season!
Jay
Posted by due unto others at 11:57 AM