Waiting here for You!


As most of you know, our friend Jamil has suffered the recurrence of a meningioma behind his right eye.  He had a surgery to remove it in 2012, only to have it recur in 2013.  At that time he underwent a second operation and then radiation.  This year, as we went to Pallisa, he looked so much better.  Jamil was doing well in school and had gained much ground on his English.  As we sent him for his 1 year follow up, we were hopeful that the tumor was a thing in his past.  On June 5th, we received word that his CT scan showed that the tumor was back again and moving closer to his brain.  Jill and I had been impressed, by God, that if Jamil’s treatment in Uganda was unsuccessful a second time that we should try to bring Jamil back to the USA for treatment.

There is a lot that is involved to get custody of a child to take them from Uganda to the USA for medical treatment.  Both countries want to make sure that it is best for the child and that those taking him or her have the best interest of the child in mind.  So we knew that it would be a miracle if we could get it all done before our scheduled departure 5 weeks later.  We knew that God had a perfect plan for this situation, but we wanted to do everything that we could to get the needed paperwork in order.  In my mind’s eye, I thought God could get the most glory by waiting to the last minute, then making dominoes fall in order.  I could see the story book ending where we got everything done at the last minute.  We leave from the US embassy with a visa that was fresh off the press and still too hot to touch.  We race to the airport and then run from one end to the other and jump on the plane, like Indiana Jones as they are closing the door.  We relax in our seats, take a deep breath and then blog about how great God is.

God obviously has a plan to bring Himself more glory.  At this point, we are getting closer to a conclusion.  We will get a ruling from a judge this coming Tuesday.  If that decision is to give us custody, we will then be able to apply for Jamil a Ugandan passport.  Once we have the passport, we can apply for a US visa.

I went out for a run this morning.  This is actually a rarity lately.  I think that I have only run 5 times in the past 7 weeks.  As I headed out from our guest house, my phone started up with the song, Waiting Here for You.


“We come with expectation, waiting here for YOU.”


“Waiting here for YOU!”


“You’re the Lord of all creation, and still you know my heart.”


“The author of salvation, you’ve loved us from the start.”


“Waiting here for YOU, with our hands lifted high in praise.”


The next verse says:


“You are everything you promised, your faithfulness is true.”


“We’re desperate for Your presence, all we need is You.”


“Waiting here for you!”

So God impressed on me that I need to forget about the story book endings and wait for Him.  This is a lesson that I need to relearn fairly frequently.  This was especially pertinent as I was thinking about what we had done in the 24 hours from 11:30 pm on Thursday night to 11:30 pm on Friday night.

Since we were not quite done with everything that would make Jamil legal to fly, Jill and I have postponed our tickets.  Thursday night, however, was the scheduled departure time, and Jake, Jared, and Jayne kept their tickets and were heading home.  We dropped them off at Entebbe airport with step by step instructions from when they entered that airport until they stepped out of the airport in Dallas.  So over the above mentioned 24 hours, the kids covered 3 continents and an ocean to travel home.

Jill, Jamil, David, and I got up early Friday morning and headed off on a scavenger hunt.  We needed documentation of some things and some legal paperwork completed that could be needed to get the US visa.  We left Kampala at 8:00 am.  We arrived in Iganga about 10:45.  There we met up with Jamil’s Aunt Margaret and Uncle Joseph.  They would be instrumental in helping us navigate the scavenger hunt.  We set out from Iganga on dirt roads, to the south east.  After driving, for 2 hours, through some beautiful, Nat Geo-type landscape, we came to Bowdha Beach, a small fishing village on the shore of Lake Victoria.  This was the last known location of Jamil’s biological mother, Robina.

I was concerned as we first started to look for her, because we were not making much progress.  Eventually we found one of her daughters and she thought that she might know where Robina was.  We followed her to the far side of the village before we realized that this 4 year old didn’t have much more of an idea than we did where Robina was.  We had located Robina’s house, but she wasn’t home.  So we decided to wait for her to come back.  As I sat there and prayed, I was thinking about how frustrating it would be for us to travel 5 hours to find her and not be able to see her.  To pass the time, I asked Margaret and Joseph a few questions to try to piece together the needed affidavits for the US embassy.  Before too long, the Mzungu (me) had become the attraction in the village.  Many kids, that I am sure had rarely, if ever, seen a white person before, came to give me five or dodge me tickling them.  I was sorely wishing that I had brought our medical trunks, as there were many kids that were sick.  Almost all of them looked very poor.  A majority of them were school aged and looking at me on an early Friday afternoon, rather than a teacher and chalk board.  Eventually, Robina returned home with Jamil's 3 half sisters. 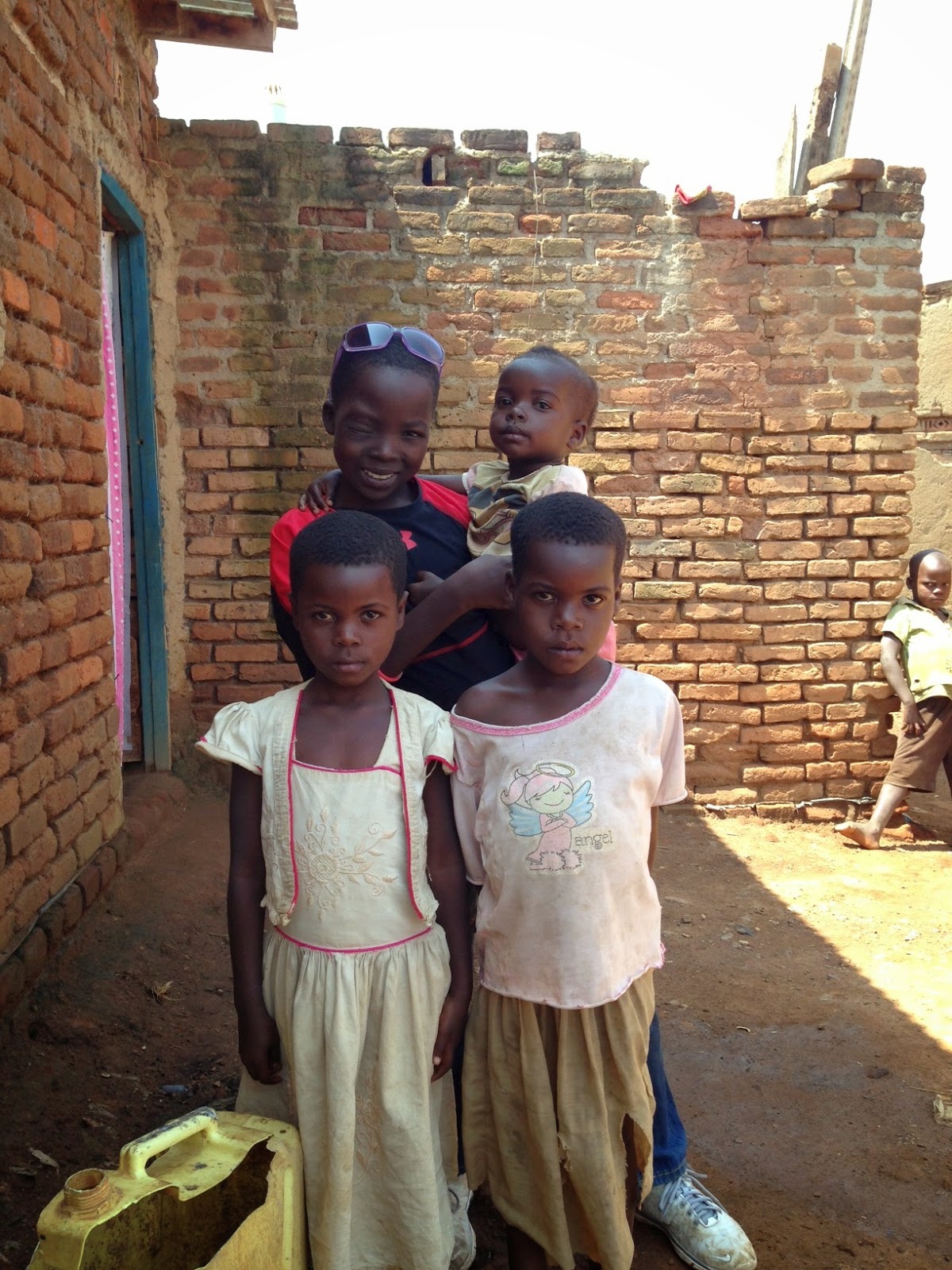 She immediately recognized Joseph and Margaret.  They had a short reunion, then Joseph told her who I was and why we had come.  We needed her consent to have temporary custody of Jamil, despite the fact that she abandoned him 11 years ago and had not participated in his care since then.  She seemed hesitant, but an old lady that had come up to visit with us, while we were waiting, convinced her that it was the right thing to do.  She agreed to consent.  So we asked her if she knew of any paternal uncles for Jamil.  She said that she did, but our best chance of finding them would be to take her with us to a place that was out from Jinja.  About the time she was getting her things together, her current husband arrived.  He was nice to me, but he seemed hesitant to let Robina go with us, unless there was something in it for him.  It must have been the prayer cover, but he eventually relented.  Before leaving Bowdha Beach, we stopped at the LC1’s office.  This is like a mayor of the local area.  He signed a letter stating that Robina was known to him and lived in that community.

So we took off again down the bumpy road, heading back to Jinja.  It was 3:15 when we left Bowdha Beach, and 5:00 when we got to Jinja.  We took off to the north from Jinja.  Again there were bumpy roads, but this time, the roads were muddy instead of dusty.  About 6:15 we arrived in Budima.  After some reunions, for Robina and Margaret with people that they knew in the area, we were taken to the grave of Jamil’s biological father.  Jamil never knew him, as he left when Jamil was very young.  We took a photo and some testimony from his family.  We then went to the LC1 in this region.  They wrote us a letter stating that they had known Jamil’s father and that in fact had died in a motorcycle wreck.  This will be proof that we only need consent from Robina.  This LC letter was written with a flash light, as it was almost completely dark.

We left Budima and headed back to Jinja.  We arrived in Jinja a little after 8:00 pm.  Now, since it was too late to send Robina home to Bowdha Beach and the other two to Pallisa, we searched for a hotel where they could spend the night.  There was some sort of trade fair in Jinja, and the hotel rooms were scarce.  We eventually found them lodging, left them money for food, and said goodbye.
We then stopped at a convenience store to grab some things to eat (first time since breakfast) at about 10:00 pm.  After a short stop there, we traveled back to Kampala, getting back to our guest house about 11:30 pm.

As we were pulling down the road to our guesthouse, I got a text from Jake that said that they had landed in Dallas.  This had been a very busy 24 hours.

So this is a great time to “wait” after all of our “going”.

We have no clinics scheduled this week.  We will be waiting here for Him, to open the doors for us to come home.

Preparing for Due Season,

Jay
Posted by due unto others at 3:33 AM