Ordinances on the Nile

Today was an awesome day in Jinja!  It featured a renewal of something old and the beginning of something new.

Today, July 1st, is the 25th wedding anniversary of Jill and I.  You are not going to believe how this happened.  We have known, for some time, we would be in Uganda on this special day.  Since we have moved to our current house, at the ranch, we have been unable to locate the box that contains the old VHS tapes, including the only known copy of our wedding ceremony.  I had been looking for it so that I could write down the exact vows that we said in that ceremony.  I looked and looked unsuccessfully for several weeks, leading up to our departure for Uganda.  Finally, in the last week, I found the VHS tape while Jill was in Duncan.  I fired up the old VHS machine and had to adjust the tracking (remember that?).  I transcribed the words we said into a Word document and saved it to my computer.  When we arrived in Uganda, I started making plans to have a renewal of the vows ceremony at Gabba Community Church.

While we were in Rukunjiri, we found out from Jamil, that he had been born again, but had never been baptized.  So Jill started making plans for a “Baptism on the Nile” party.  She said that this was all that she wanted for our 25th anniversary.  So she started making plans, inviting many of our friends in Uganda, and even planning a lunch after the Baptisms.  I talked to our friend, Pastor Ken Gallyen, from Alabama.  He was going to be in Jinja and wanted to be a part of the party.  I told him my secret of renewing the vows and emailed him the Word document.  Then, I just sat back and smugly watched as everyone was showing up for the Baptism Party.  I was going to get to score some big bonus points for this forethought!

Meanwhile, Jill went shopping in Jinja.  I know, what else is new?  Yesterday, she purchased African shirts for myself, Jake, Jared and Jamil.  She also purchased a dress for herself and a skirt for Jayne.  I thought that she was just going to take advantage of the setting to take some family photos.  I was also thinking in the back of my mind how sharp it would be to do our renewal of vows ceremony in these duds!


So we arrive at the property in Jinja.  It is a beautiful place that has a large slope of grass down to the Nile.  Our friend David has his video camera.  Our friend Faith has her Cannon regular camera.  I’m thinking, how lucky can one guy get?  This is all going to be recorded too!  We walk down the hill to the river and I am excited as Ken says I want to gather you all together before we start the Baptisms.  He said the following “I don’t know exactly how to say this, except just to spill the beans.  Both Jill and Jay, separately and secretly planned to surprise each other with a renewing of their vows ceremony.  I was like yeah!  That’s right! I’m a romantic!  Wait, what did he say?

So Jill had planned to do a renewal of the vows ceremony.  She had coordinated the guest list, arranged the lunch, ordered a cake, picked up some new African rings, and got us in fancy African clothes.  I had found a VHS tape, transcribed some words, then piggy backed off of her.  Oh well, she one upped me this time, but the two of us together had planned a really nice ceremony and had 15 friends and our family together on the banks of the Nile River. 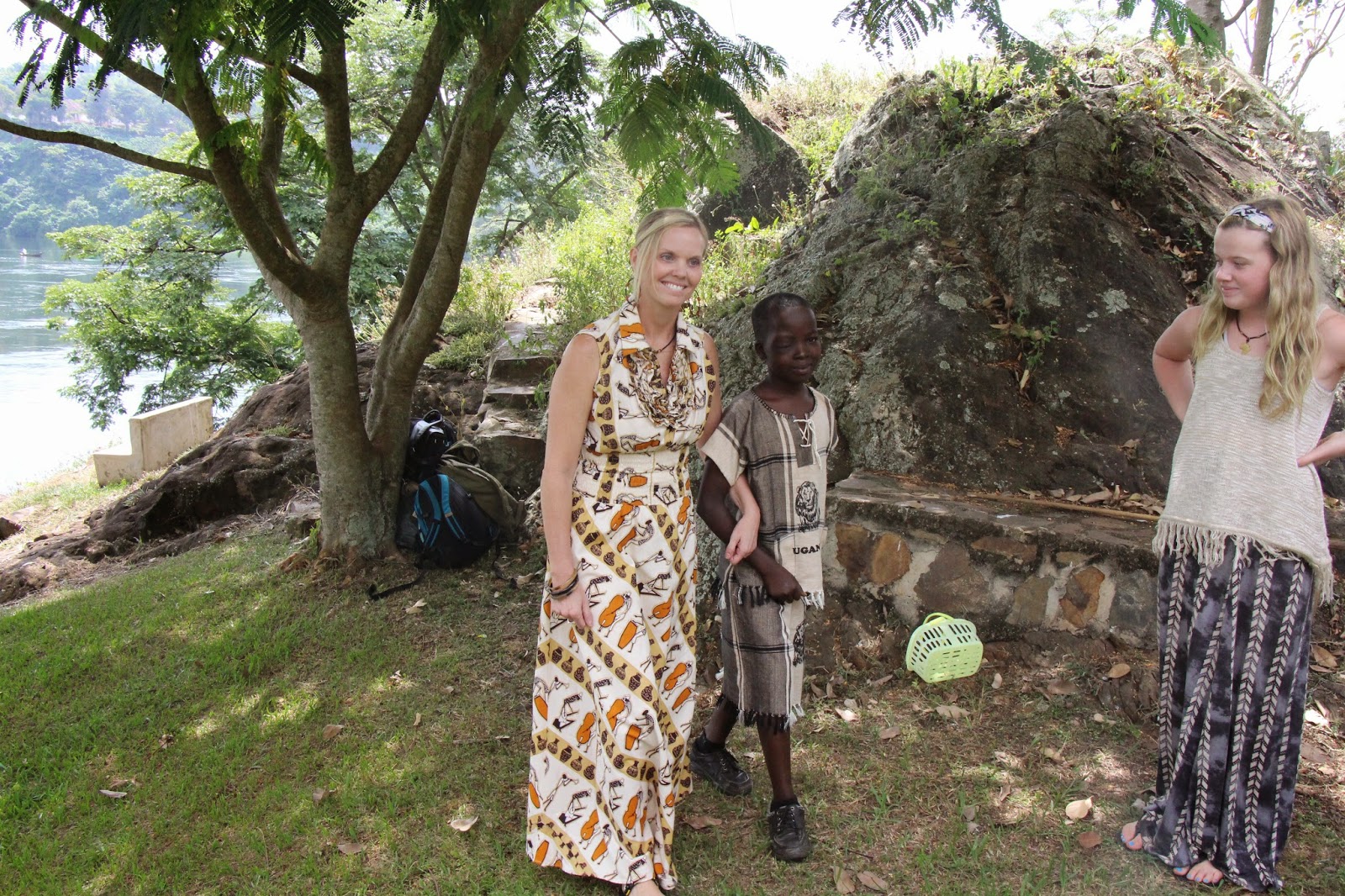 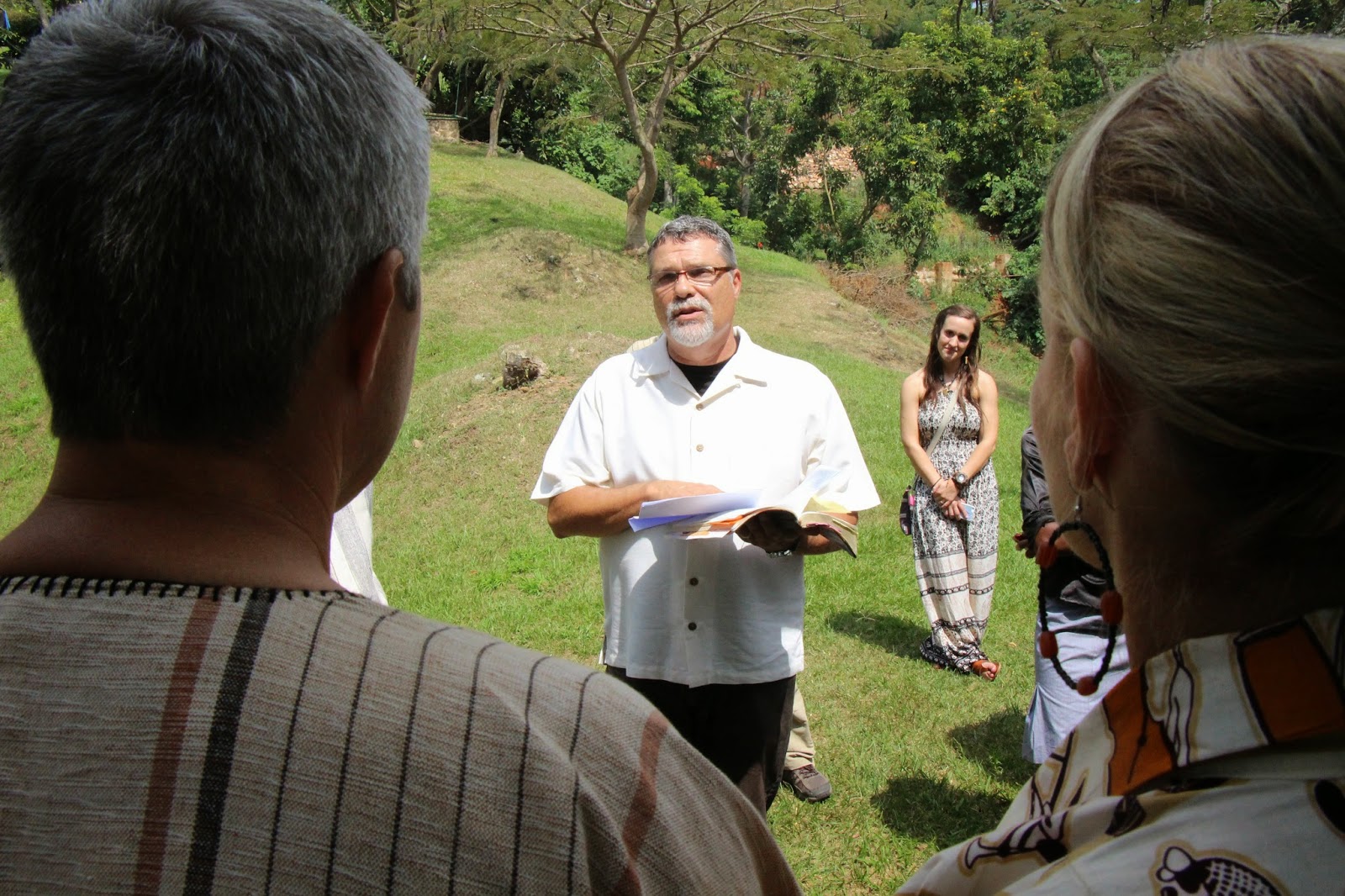 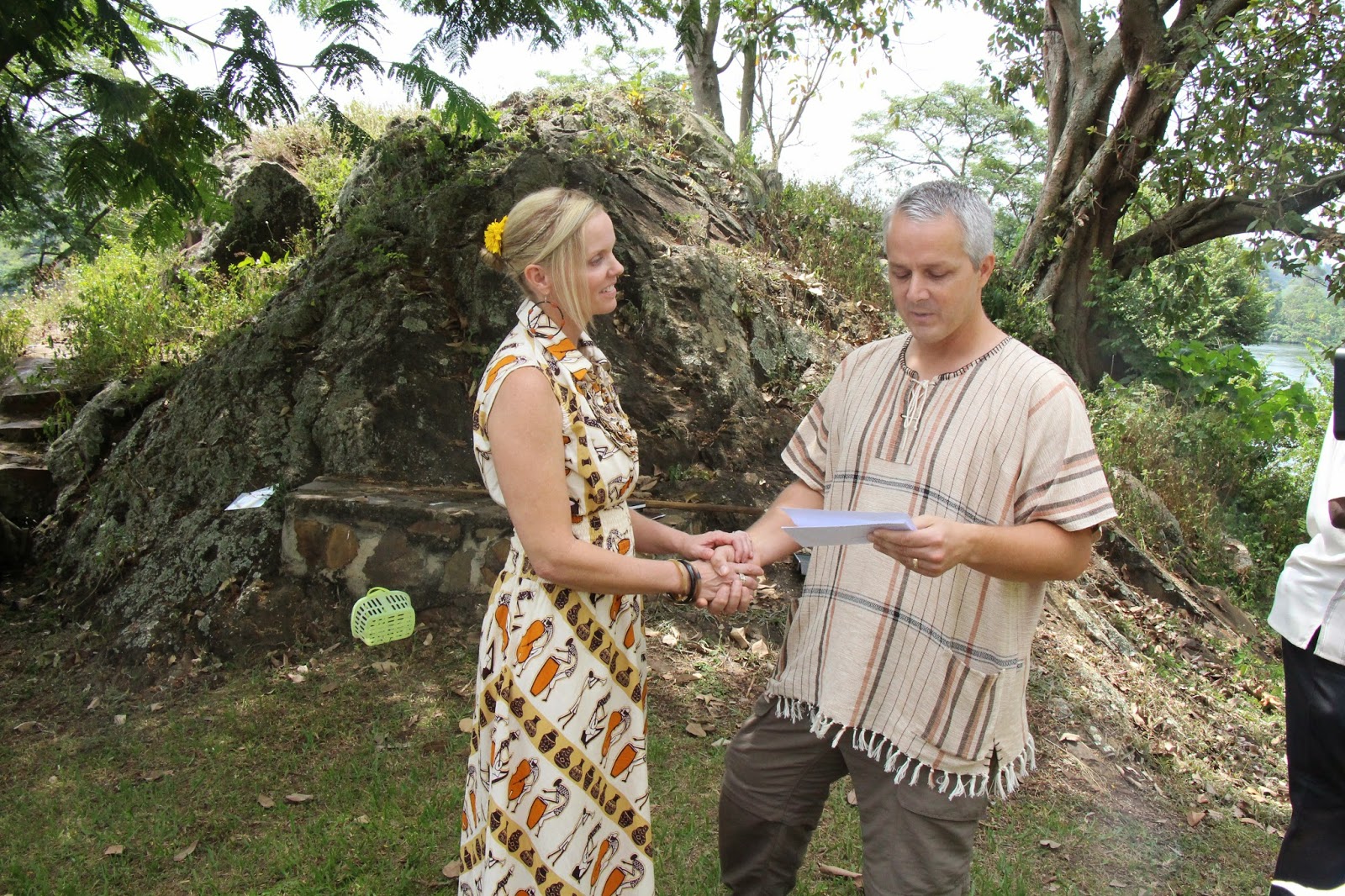 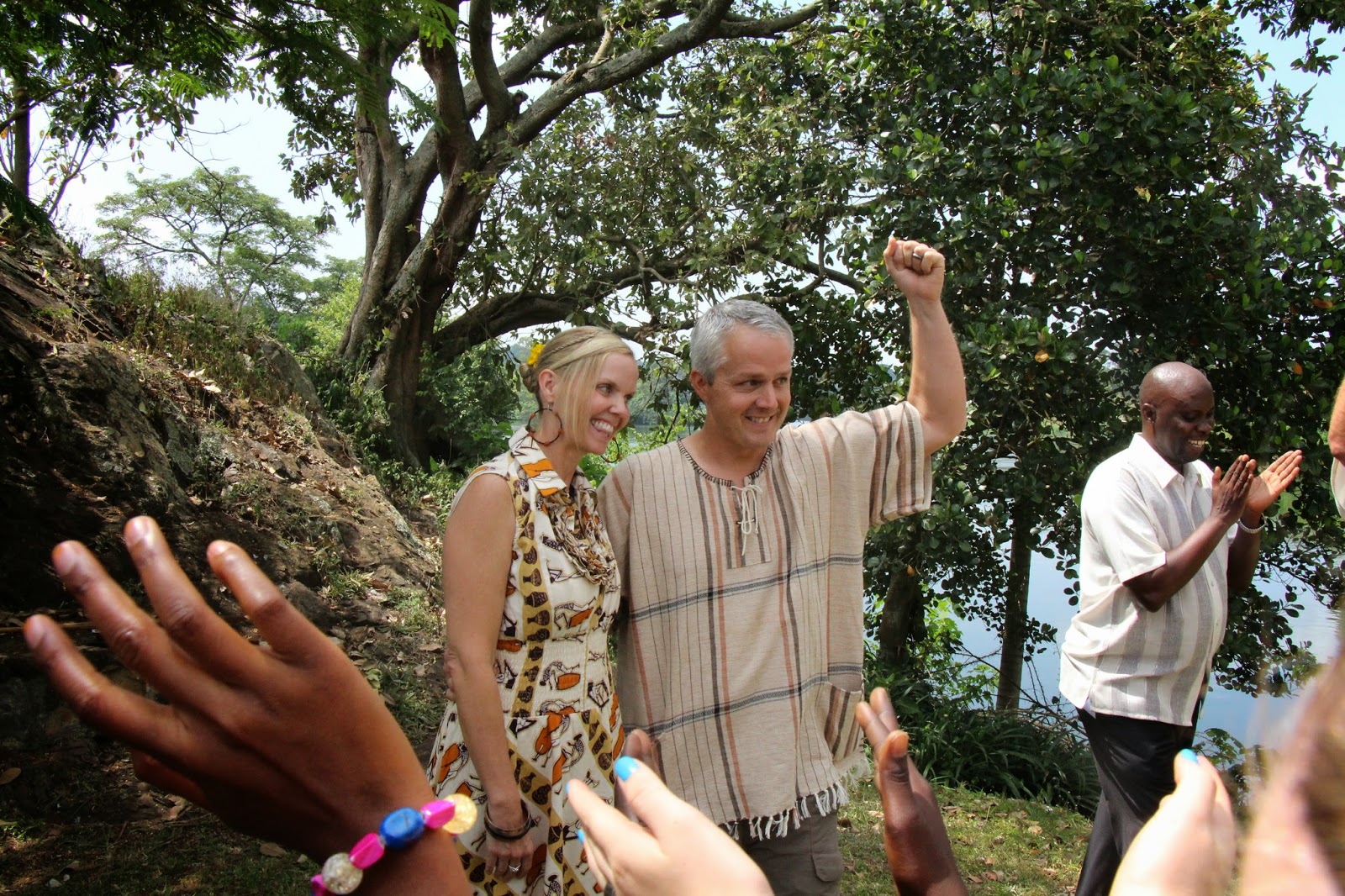 Jamil walked Jill down the…..hill, and then we had a short and beautiful ceremony, repeating the exact words that we had uttered 25 short years ago.  How amazing is it, that as we gathered with this large group of family and friends that there was no one, besides Jill and I that had been at the original ceremony?

Now on to the new beginnings.  We moved down to the river bank.  Our friend, Jonathan Kabanda, led the Baptism part of the day.  I was blessed to be able to help him in the water.  While we were talking with Jamil about his salvation and Baptism, Jared told us a new bit of information.  He had made a profession of faith several years ago.  Last year, he wasn’t sure that he had understood what he was doing at the young age that he had first prayed the sinner’s prayer.  So last year, he re-prayed that prayer.  He had not been baptized, since that prayer.   So Jared went first.  Jayne wanted to be baptized again because of the nostalgic location of the service.  So she went second.  Jamil was third. 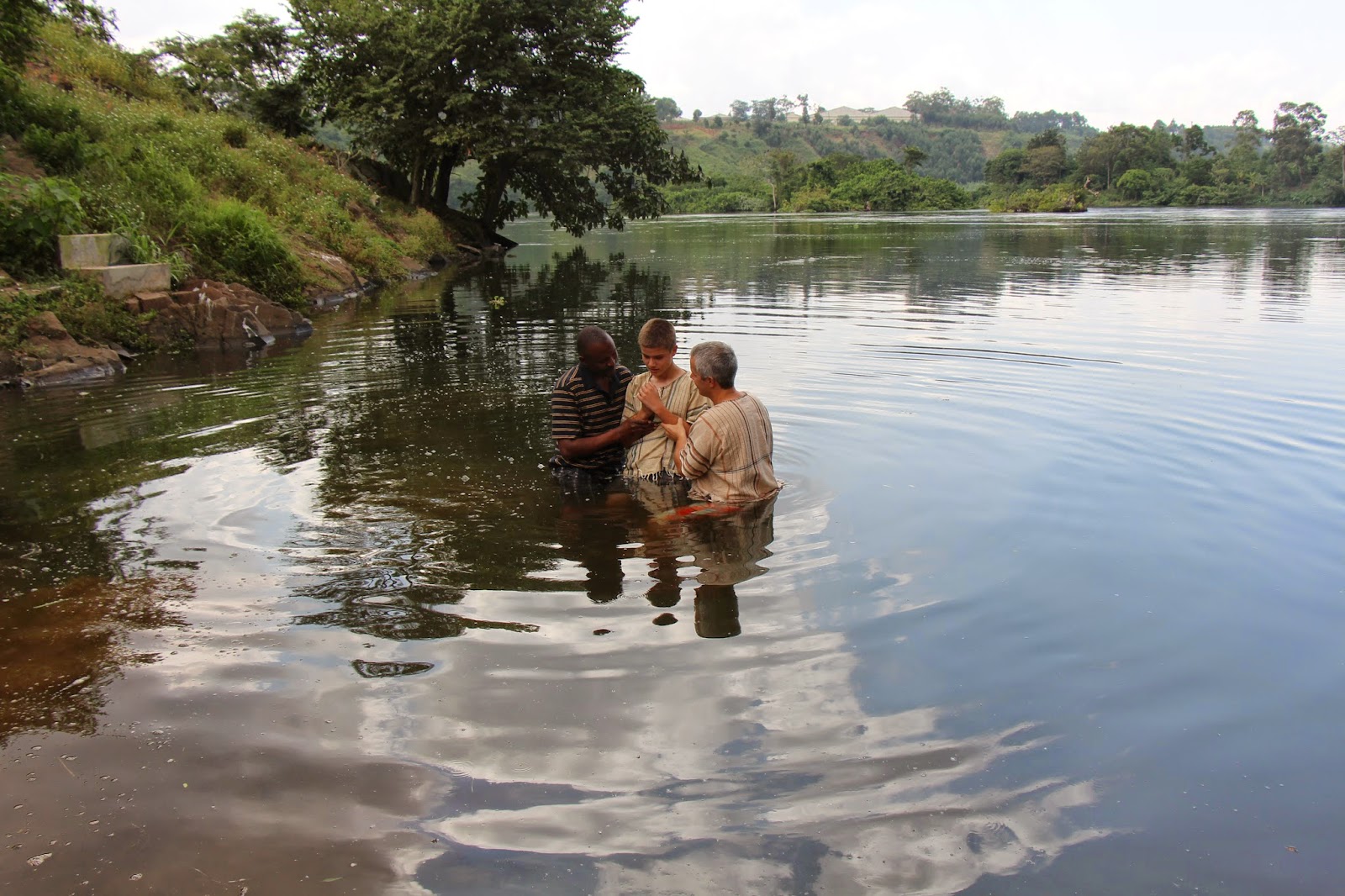 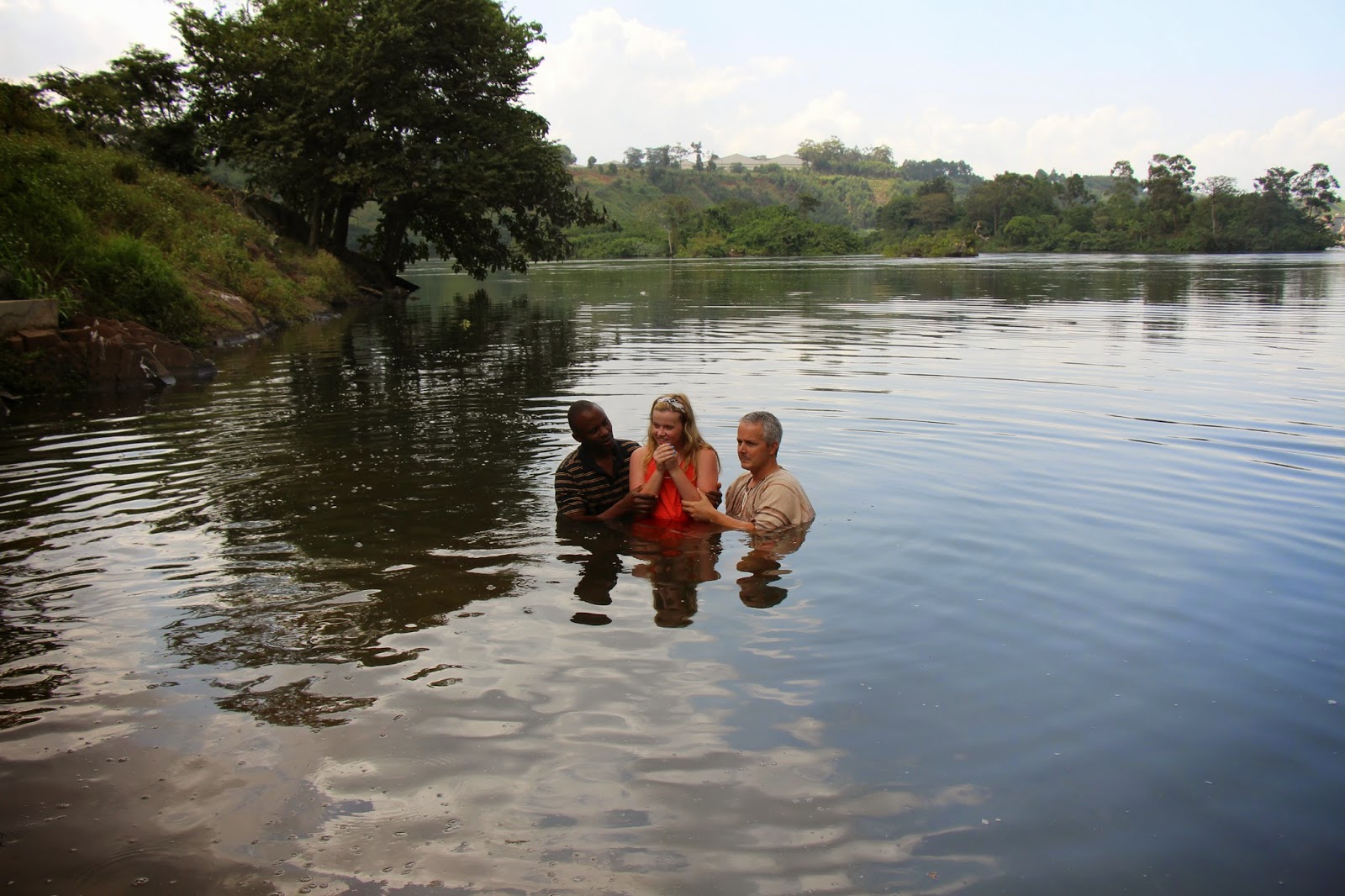 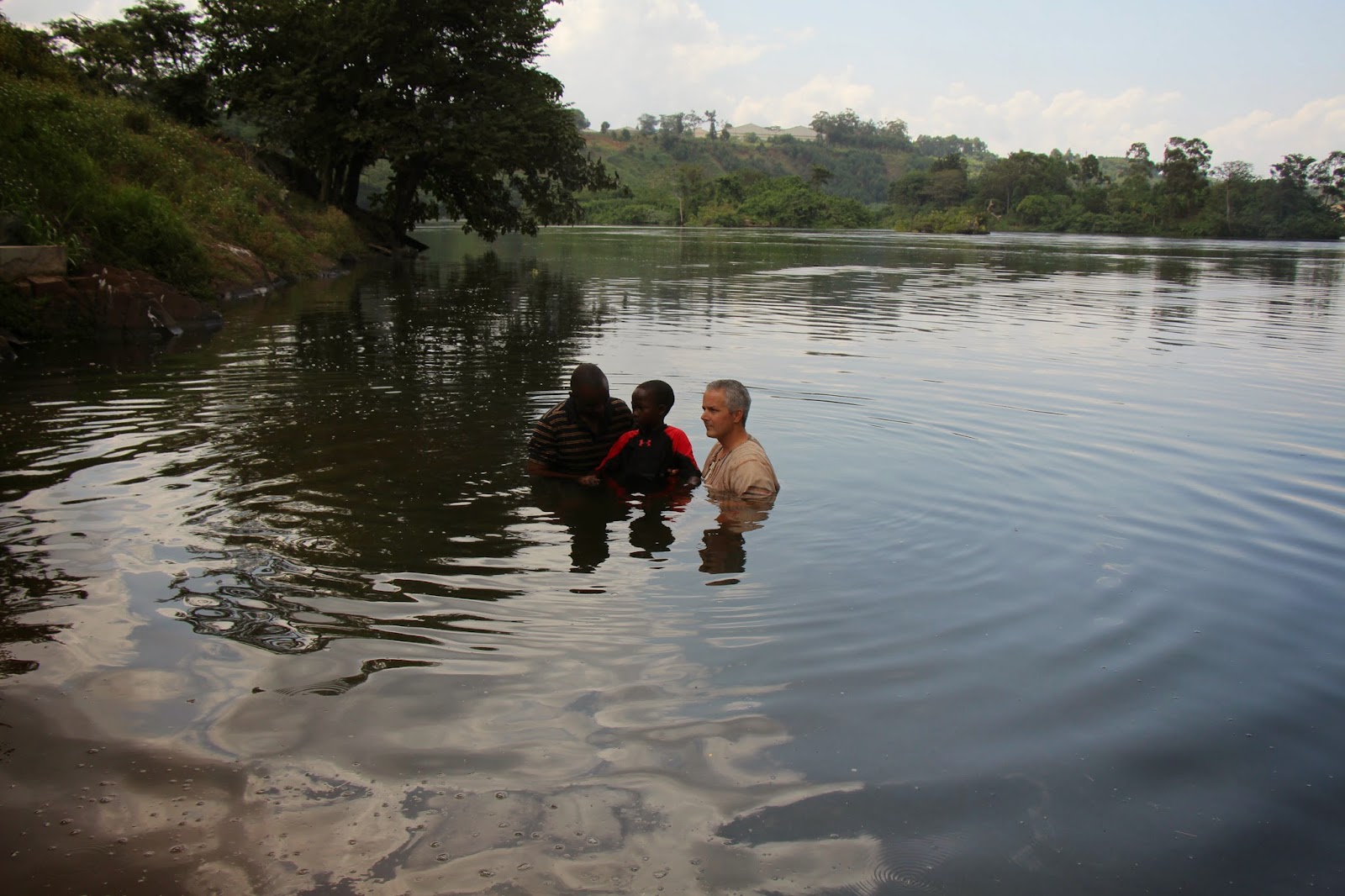 Pastor Fred, from Palissa, joined us by the Nile in Jinja today, as well.  He had been in Palissa, and was able to bring Magdalen and Allan.  Magdalen is a girl that Jayne has friended and that Due Unto Others has been sponsoring in school.  She too had been born again, but never Baptized.  Allan is a young boy that April Berry has been sponsoring in school.  She recognized him as That One Person one day as we were working in Palissa.  He too had never been baptized.  Magdalen went 4th. 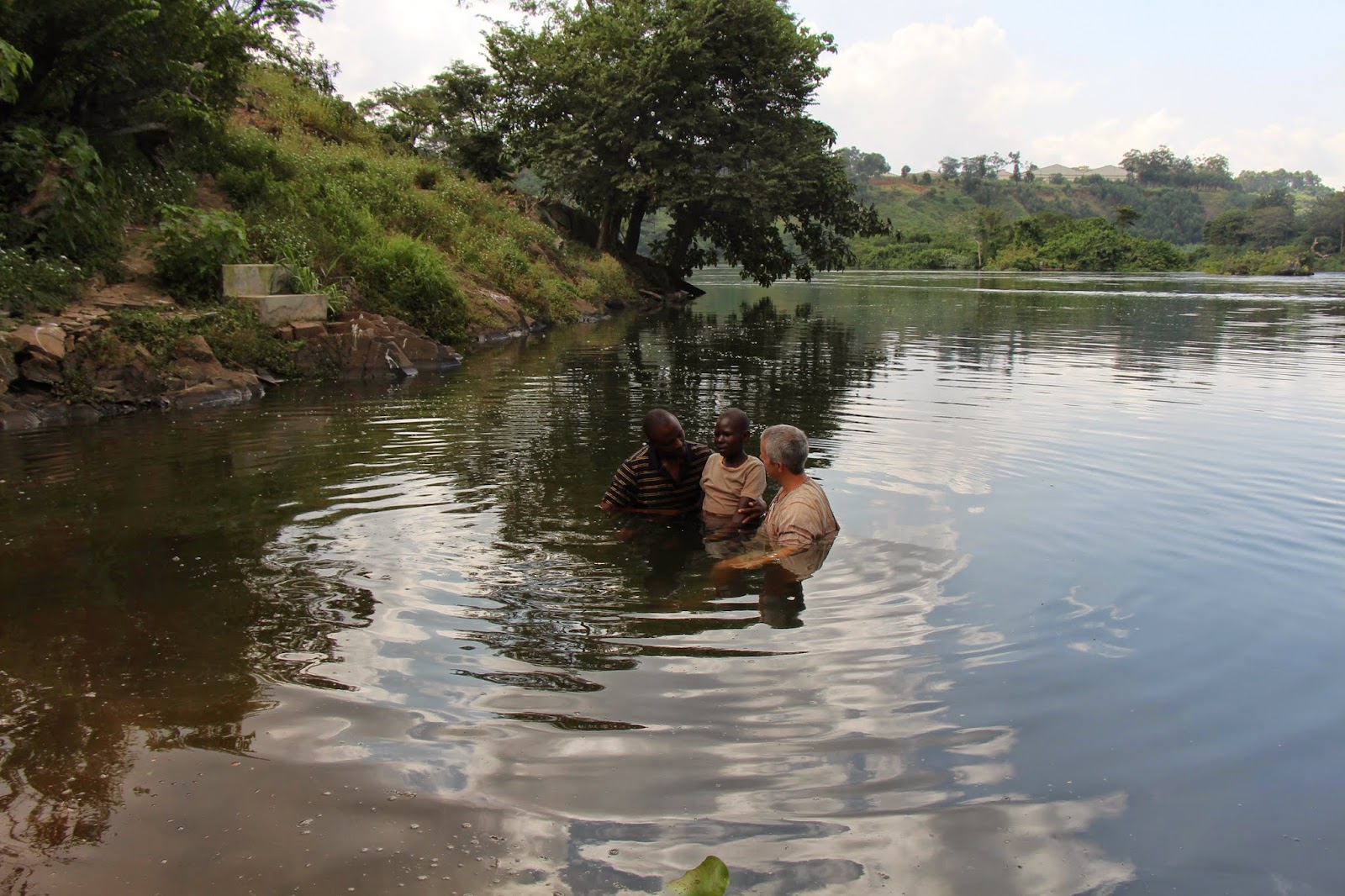 As Allan went, Jonathan asked him if he had been born again.  He said no, but that he wanted to be born again.  He prayed the sinner’s prayer, standing in the Nile River and then was immediately baptized! 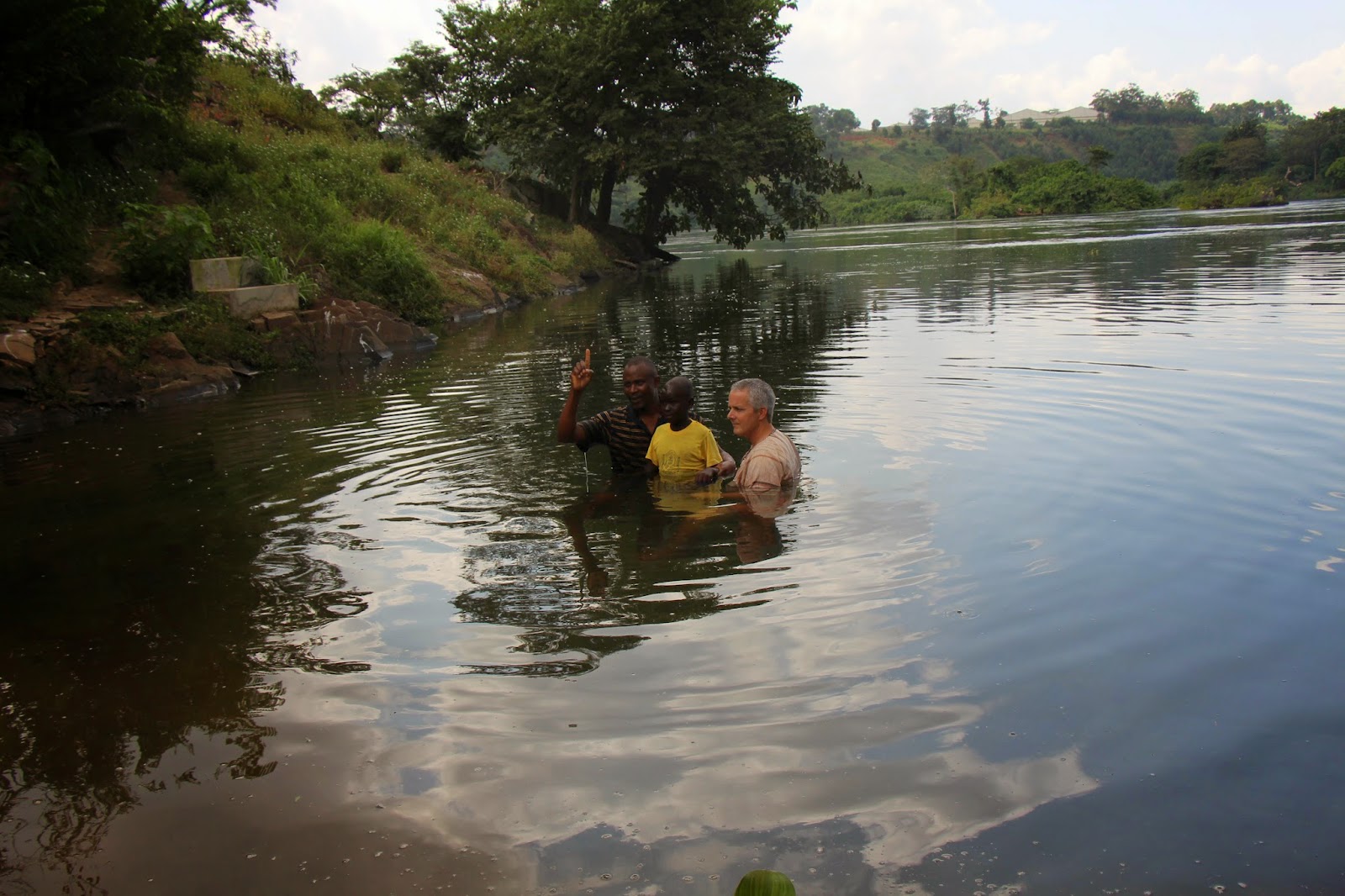 Following the ceremony, we gathered around these 5 young people and prayed over them. 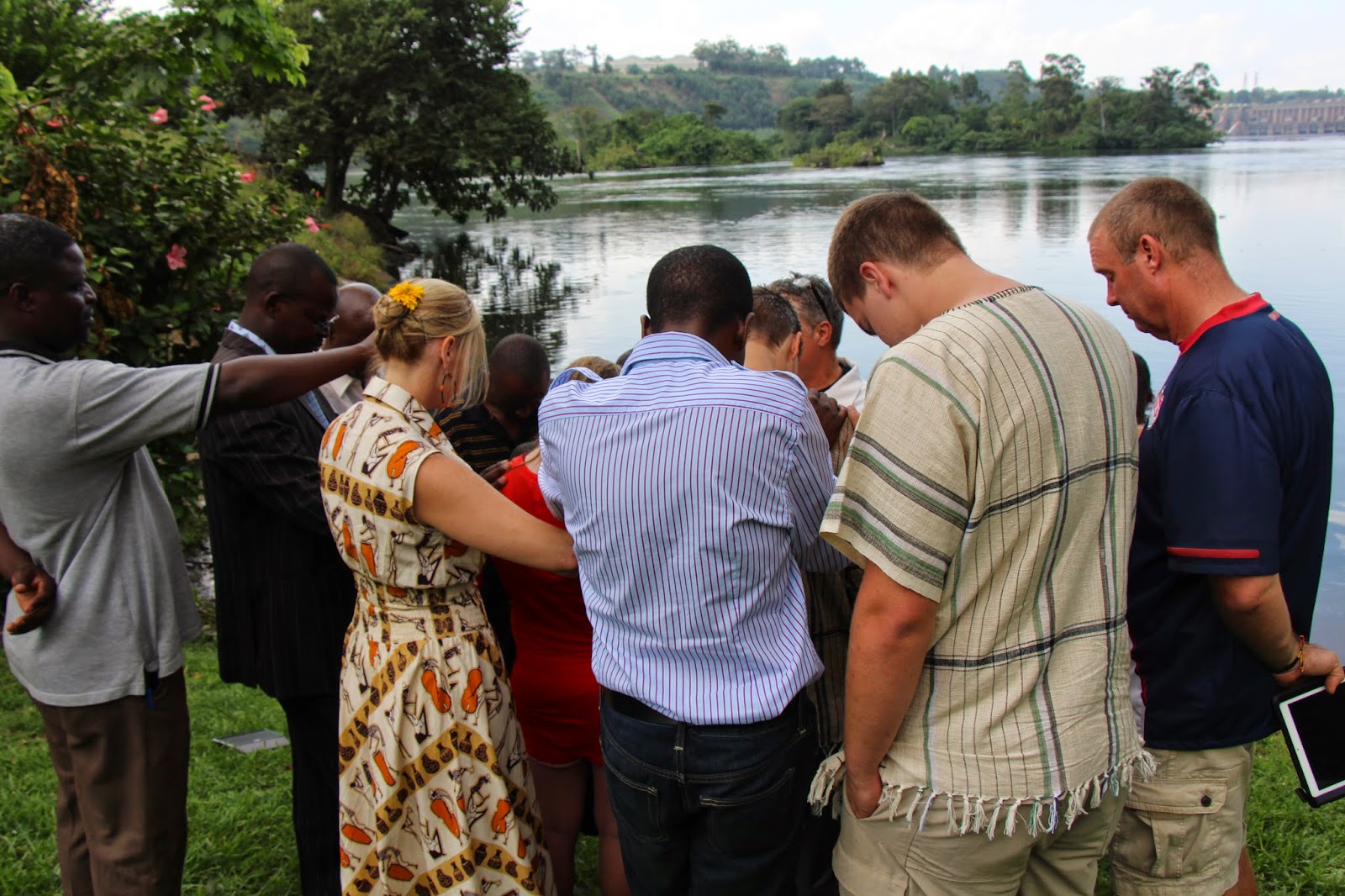 Then those of us that were wet and muddy, went to change clothes.

Jill and I got to cut the wedding cake and give a little speech to those present. 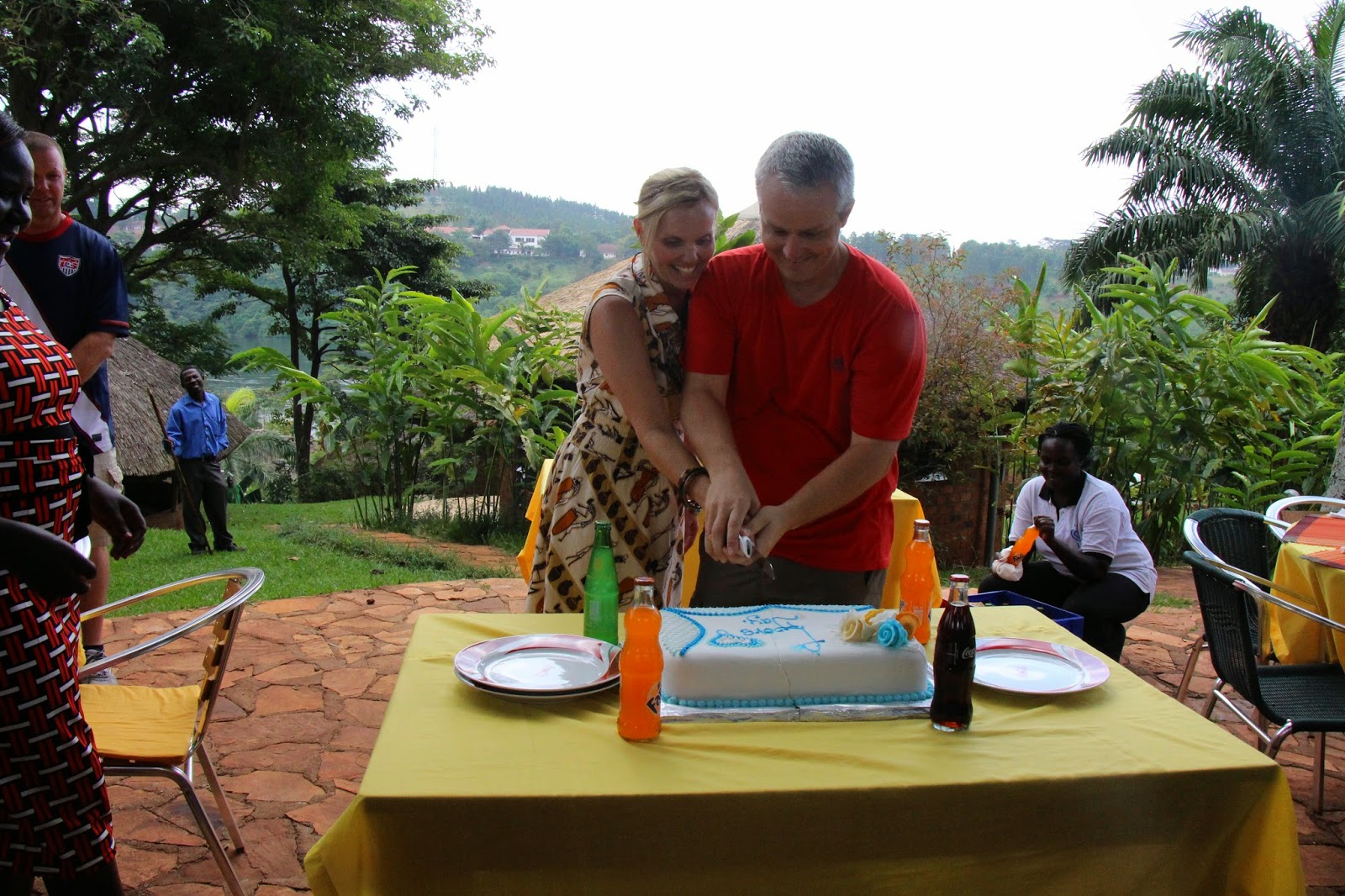 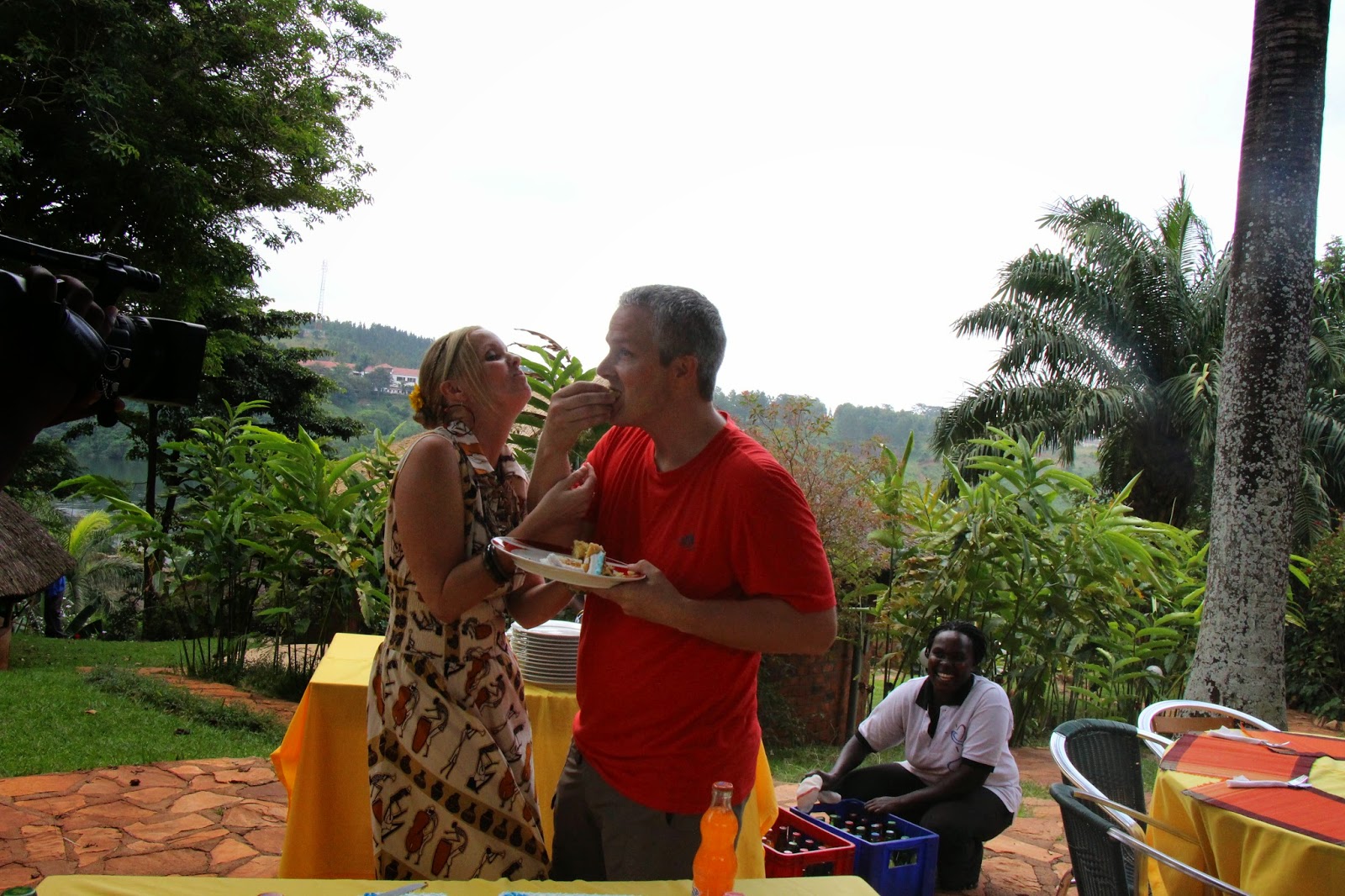 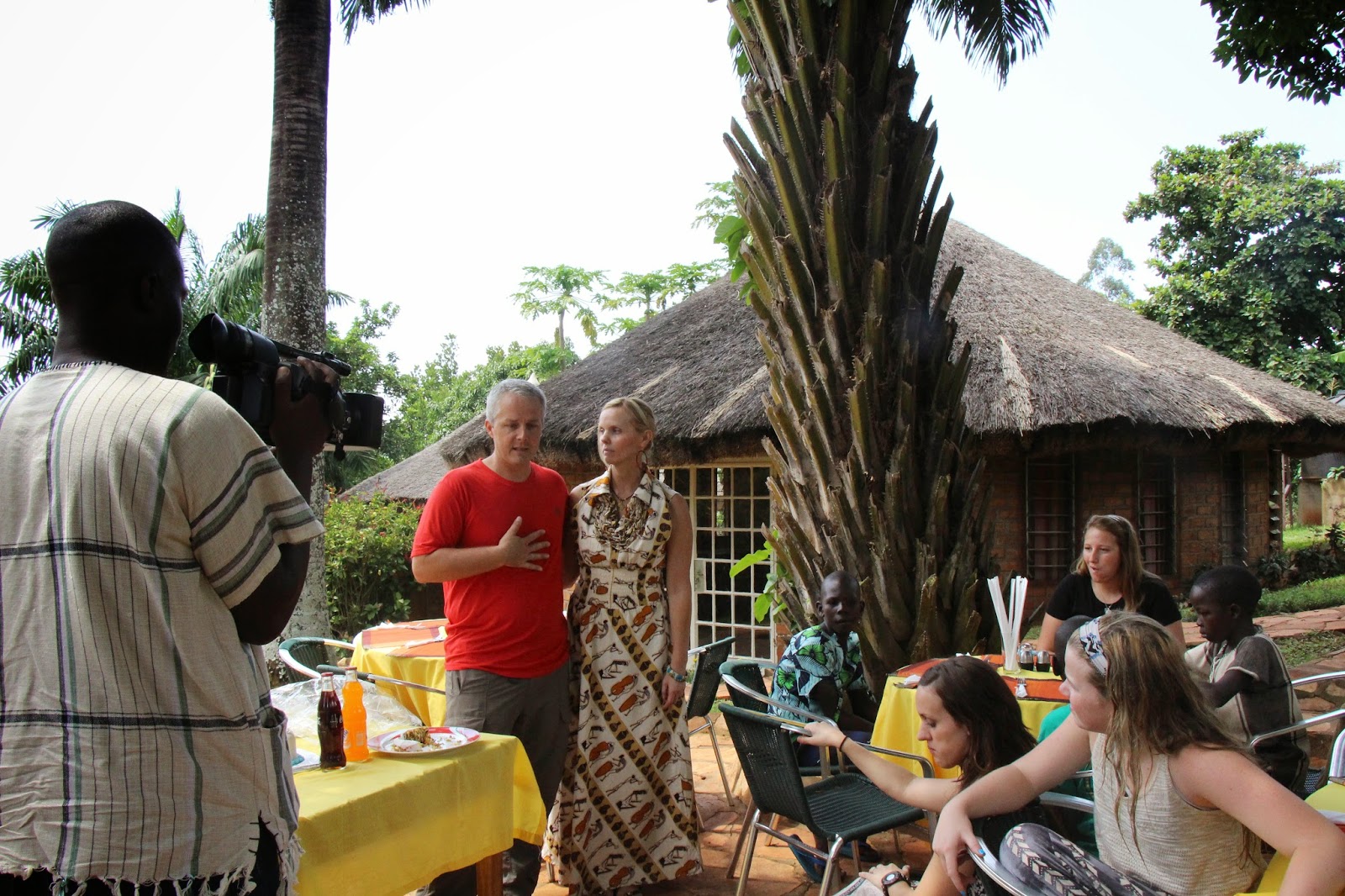 We were supposed to give words of wisdom on how to make a marriage last 25 years.  I don’t know that I had any really good advice, but I did quote the great American philosopher, Clifford McGhghy.  He says that “the secret to a long marriage is for both people to think that they married up, out of their league, and for neither of you to find out any different”.

Today was an incredible day.  Two of the ordinances that we observe as Christians were on display.  Baptism and marriage.  There could not have been a better backdrop than the magnificent River Nile.

Jay
Posted by due unto others at 1:46 PM