Lots to catch you up on! 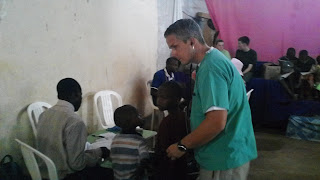 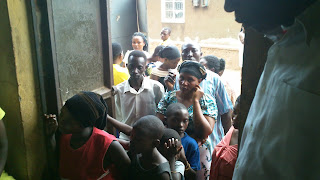 Sorry for my lack of diligence in keeping you updated from Uganda.  We tend to stay busy, even on our “off days”.  On Saturday, the Gregstons and most of the Gashes went to Wankulukuku to help with a free clinic there.  The Medical and Dental Missioners of Uganda, is a group of medical professionals (lab techs, doctors, dentists, clinicians, nurses, etc) that come together on one Saturday per month to put on a free clinic, associated with a church, in Uganda.  Saturday marked the first time that the Renewal Health Network had joined this team for a mission.  We had a great time and saw many people.  Wankulukuku is a slum in the northern part of Kampala.  I got an email tonight from the organizer, and I would like to show you the main part!
Together we treated 390 patients, 28 were dental cases and had extractions, 24 people were Counseled and tested for HIV and the greatest news is that 65 people committed their lives to Christ! Delivered from the enemies Grip and translated to the Kingdom of His dear son... Who hath delivered us from the power of darkness, and hath translated us into the kingdom of his dear Son: (Col 1:13, NKJV)
Sometimes, we start to think that we are tired, but then news like this gets us re-energized!
On Sunday, an “off” day, we went to early church at Watoto Central.  After worship, we met up with our friend Rogers.  We had discussed this day with Rogers about 10 days ago.  He had arranged, through the Watoto office, to take us to the Bbira children’s village.  This is a village that we got the pleasure of touring in July, when we were here with the group from Ardmore.  On that particular visit, we got to eat lunch with Mama Ruth and her family in their home.  After that day, we took the opportunity to sponsor two of the children in that home.  So prior to going out to Bbira, we bought some shoes for our sponsored kids, and we bought some soccer balls, cookies, sodas, pens, etc. for the whole family.  We had been derelict in our duties to write to our kids, even though they had written us, last year before Christmas.  The family kids and Mama Ruth found out that their sponsors were coming, Sunday morning before church.  They thought it might just be me, or just Jill, or just Jill and I.  They were quite surprised to see the whole family.  When we arrived, we found the house empty, as everyone was at worship.  Mama Ruth was the first to get home, and we could see her smile from 100 yards away. 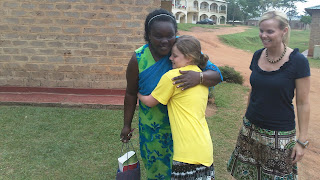 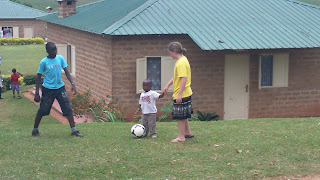 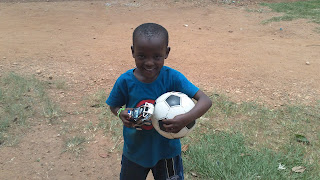 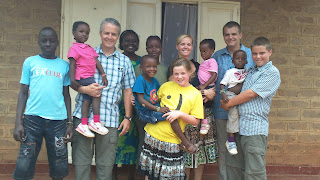 She came up and called us all by name, even though we had not seen her but one afternoon 8 months ago.  We got to give our gifts and catch up with some old friends/family.  Jemimah, our sponsored girl, had just told Ruth the day before that she felt like her sponsors were coming, because we had not written her!  Then she found out the next morning that we were on our way!
We were trying not to impose or put Ruth out, as we knew that our coming had surprised them, so we tried to leave so that they could get ready for lunch.  Ruth would have NOTHING of it!  She said that she always made extra on Sundays, in case she could invite someone over for lunch.  We had a traditional Ugandan meal.  Mama Ruth kept saying over and over how happy she was that “her family” had come to visit.  We played a game that is very similar to trouble and spent more time in the afternoon. 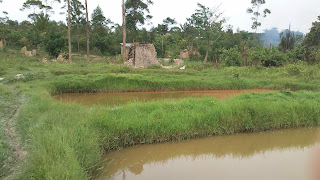 After we left Bbira, promising to return more times before we head back to the US in July, we went to visit one of Rogers’ business sites.  He has a brick making business and is developing fish farming and pig farming on the same family land.  I encouraged him and offered him a few suggestions.
We then made our way back to Kampala and stopped at a store to pick up some gifts.  We had found out on Saturday, that a 9 year old boy, named James, was in the Wentz Medical Center.  We had seen James in the Jabez Primary School in Mubende, a few weeks back.  Between our visit to Mubende and this weekend, he had been in a horrible accident.  He had been struck by a car and had suffered a broken right femur and had to have his left leg amputated above the knee.  After the amputation surgery in Mubende, he was brought to Wentz to await an orthopedic surgery to fix the right femur.  The plan in Mubende had been to leave him in traction until the femur healed, but a surgery would get him well faster and likely help control his pain.  We picked up some toys, some paper, pens, colored pencils, crosswords and other things that could help a 9 year old pass time, laying flat on his back!  We took those things to the hospital and got to visit he and his family for a little while. 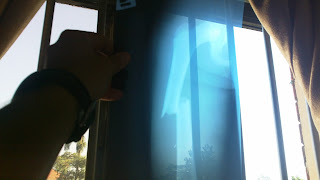 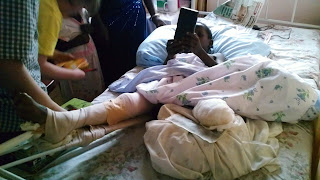 We were able to pray for them and commit to continuing to pray for him.  This morning, we took him some balloons.  This serves two purposes.  He gets to have fun with them, but it is also therapeutic for him to take deep breaths and blow the balloons up periodically.
Our clinic for the today (Monday), was in Konge.  Konge is a slum area that is pretty near Gaba, our home base. 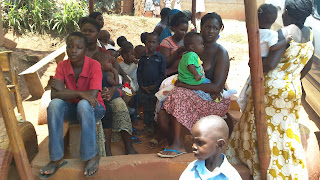 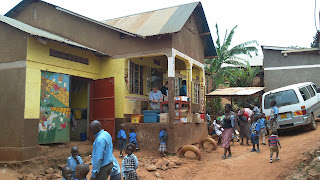 We saw about 100 kids from Shalom Primary school and from the surrounding village.  Most of these kids were in pretty good health.  We did find 2 however, that God impressed on our hearts in a “more specialer” way.  The first of these was a 5 year old girl named Tendo.  She had suffered an “auto accident” some time in the past.  The car had run over her and it was quite fortunate that she did not die.  She had been cared for at the national referral hospital.  Among other injuries, she had been treated for a traumatic diaphragmatic hernia.  Basically, she had a blunt force to her abdomen that was forceful enough to blow a hole in her diaphragm and allow some of her intestines (and other abdominal contents) to push up into her chest.  After healing some, she was allowed to go home and told that she needed to return to have a surgery to patch the hole in her diaphragm at a later date.  This later date has never come, because, even though it is a “government” hospital, she can’t get treatment unless she pays for it.  So she is short of breath most of the time because her lungs don’t have enough space to fully expand.  She can’t eat well, and has to hit her self in the chest to be able to swallow.  Because of her "fixable" problem, she is losing weight and not doing well.
The other child, Nakiganda, is a 6 year old that weighs 8 kilograms!  For those of you metrically challenged, that is less than 18 pounds.  She is very small and I would have guessed her at 3 years old.  Her story is sketchy, but she lives with her grandmother because her mom was not feeding her and she was severely malnourished.  Even though she is eating now, she is not growing.  She is able to walk, but she is weak and unsteady.   She has really not had any work up for this as the family has not had the money to go to the national referral hospital.
Jill and I felt that God was prodding us to make these girls "our business".  We discussed the issues with our Renewal Healthcare Network/Due Unto Others team and mapped out a plan.  Tomorrow morning (Tuesday) at 7:30 am, we will be picking these two girls and a parent up from the school and going to Mulago (the national referral hospital).  We will get triaged and wait in line to see what specialist we can talk our way into seeing for these girls.  By mid day tomorrow, I may have some special requests for funds to try to get the surgery scheduled for Tendo, and the testing done for Nakiganda.  I plan to keep a timed blog of our day and pictures of what we see there in the hospital.  I am praying that the Due Unto Others team of supporters can come up with funds to make a huge difference in the lives of 2 young girls.  Please keep these girls in our prayers as we follow what we feel God wants us to do as his hands, feet, and advocates for these 2 lovely human beings without much voice right now.  We expect this to be a long, frustrating day, but it will all pay off if we can get some medical resolution for these girls.
On our way home today, we stopped in to see our friend Jonathan, the boy that has healed miraculously from the burns on his arms and abdomen.  We were able to get him a pair of shoes that he was sure proud of! 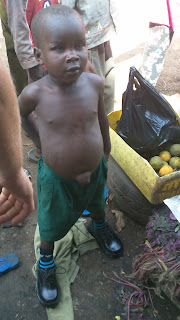 Please continue to pray for Jonathan.  And please add Tendo, Nakiganda, and James to your list.

I will update on our day at the hospital soon.

Jay
Posted by due unto others at 2:38 AM