Today, we got to see some 1 and 2 year olds in the Africa Renewal Ministries Early Childhood Development Center (ECDC).  These are some of the cutest kids on the planet.  A few of them were snotty, one had pneumonia, but all of them were playful and a joy to be around.  We got to see the routine that they had each morning and got to try their “Posho” or porridge that they had for breakfast.  I would eat it, if I was hungry enough!!  After we had done the health screening on all of these kids, we went to Wentz Medical Center to eat lunch and fill a handful of prescriptions that the kids needed.  We also took the little girl that had pneumonia to get some IV antibiotics. 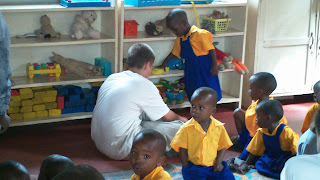 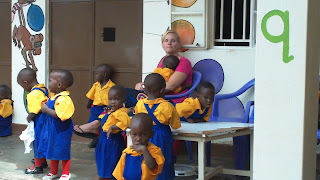 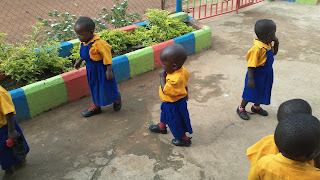 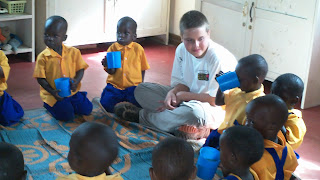 On our way back down to the kid’s school, we stopped in and saw Jonathan. 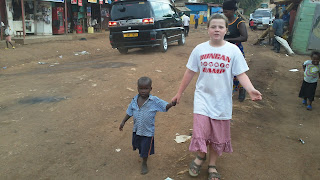 He continues to do well as he is almost completely recovered from his burns.  I still believe that his healing is a miracle.  We saw a little girl in the ECDC that had severe burns on her legs in the past.  Her left knee would not straighten out completely due to the scarring.  So she currently and likely permanently going to limp on this leg.  This is exactly what I feared would happen with Jonathan’s arm.  But now, I don’t think that he will even know that he was burned, when he gets older.  We introduced Jonathan (now 3 years old) and his mother, Jennifer, to the Africa Renewal social worker.  We are hopeful that he will be admitted to their primary school and can be in their sponsored child program.  In that program, the child has his or her school paid for, health care covered, breakfast and lunch on school days, school uniforms, a Christmas gift, Summer Camp, and a new pair of shoes each year.  All of that for $35/month!  If anyone is interested in us finding them a child to sponsor, please let me know.  I am sure that we will discover other kids that need that hand up as we move forward and we would love to connect you with them!
We had a surprise visit from Paul today!  We were wrapping up our work at the ECDC and he came walking up.  He looked snazzy in a black suit!  I did not recognize him at first, because he looked so……WELL.  You might recall, he is the pastor that was brought in by 3 friends in Kachungwa.  Paul was very near death when we saw him and today he is alive and well, to God’s glory!  He said that he was feeling great and that he would never forget us!  He is in Kampala this week for a pastor’s conference. 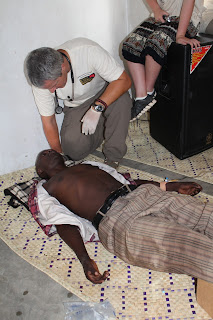 Above was Paul when we saw him in Kachungwa 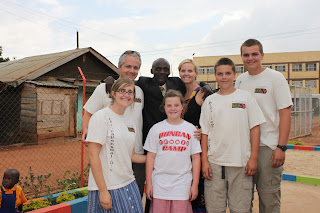 Paul today!
I also need to tell you about this past weekend.  Our friend, Rogers, from Watoto, got us tickets to the Watoto production of Heaven’s Gates and Hell’s Flames.  This is a drama that shows different people from different walks of life, coming to the end of their lives and standing in front of the Lamb’s Book of Life.  Those that have accepted and followed Christ, are ushered into heaven and those who have not accepted Christ are thrown into the Lake of Fire.  At Roger’s recommendation, we got there 90 minutes early to get a seat.  They crammed us into this place like sardines.  When we sat down, I thought that we were sitting too close together.  Then, they added two more people to our row.  They had all of the windows and doors closed to keep it dark in the auditorium.  It was definitely not a place for the claustrophobic!  Before the show started, I texted Jim twice.  The first one I said, “well, it looks like they have the Hell’s Flames part down”!  Then after I noticed the lines of people standing along the walls on both sides of the building, I texted “Do they have Fire Marshalls in Uganda”?  There was plenty of oxygen in the room, it was just all clinging desperately to carbon atoms making carbon dioxide!  If I had to guess, I‘d say that 1500 people saw the production at 5:00pm on Saturday.  At the end, there had to be 300 at the altar giving their lives to Christ!  It was incredible to see the Holy Spirit work.  We forgot pretty quickly about the heat, the seating arrangements and our selfishness leading up to the performance.  My hat is off to Watoto.  They run this production all week and have seen a great harvest for the Kingdom!
I heard, over the weekend that the Garage Sale to support Due Unto Others will be March 17th.  If you have anything to donate, please contact RawChurch to see where you can take it.  Please tell your friends about the garage sale and let them know that the proceeds are going to fund the medical supplies in our van!
Thanks for all of your support.
Jay
Posted by due unto others at 10:59 AM