Since we arrived in Uganda, almost 8 weeks ago, my head has been flooded with numbers and conversions, most of which are quite distressing to me.  Most of you who know me, understand that math is not one of my strong suits.   To me, 34+34=…….West Reno and time to go furniture shopping! (This is a regional joke for those in Oklahoma)  It is fortunate, I guess, that I am married to Jay.  He likes to think about numbers and can do long division and multiplication in his head.  He sometimes will give his answers in his “Rain Man” voice, saying things like, “The answer is One thousand four hundred and thirty seven…Yes, definitely and odd number”!  Jay is the person that has purposefully never done a Soduko puzzle, because he is afraid that once he starts, he might not be able to stop and end up jobless, homeless and on a park bench somewhere!
What are some of these numbers and conversions that have bombarded me?  I am so glad that you asked!
First of all, there is the whole metric to English conversion.  The one of these that I have encountered most often is miles to kilometers.  This has filled my mind and helped me pass time while on the treadmill.  Pacing my workout in KM/hour and getting a total distance has left me as tired mentally as physically when I exit the gym.  Speed limits have not been too much of a problem, as the traffic, pot holes and speed bumps really make speed limits a moot point.  In our clinics, we weigh kids in kilograms and measure them in centimeters.  This is taking some getting accustomed to, as well.
The next conversion that haunts me is the Fahrenheit to Celsius conversion.  This is mainly a problem while cooking.  I don’t know how many times that someone in our group has needed to remind me what the conversion formula is.  The worst part about the formula is that once I remember it, I need to plug in numbers and do math.  While in Uganda, I have made the google search for Fahrenheit to Celsius my home page on my phone.   This difference in temperature scales, has not really bothered us as far as weather is concerned.  It is about the same temperature every day.
Another conversion, that has left me frustrated, is the conversion of dollars to shillings.  One thing that makes this even more of a challenge is that the ratio is always changing.  When we got here, one dollar was equal to 2,300 shillings.  Now that number is more like 1 dollar being equivalent to 2,500 shillings.  Jay has told me that this is good for us, as we have our money in dollars, but bad for the Ugandans, as the little money that they do have, is now worth less.  We pay for almost everything in cash.  It is still hard to hear of some of the large numbers that we pay for groceries or dinner.  At home, I would not think twice of paying 50 cents for something.  It seems more painful, however, to shell out 1,250 shillings.  Recently, we smashed 4 bananas while trying to drive out of a market with very small roads.  We had to pay 500 shillings to purchase the bananas.  This seemed like way too much to pay for this accident.  Jay then reminded me that this was about a nickel per banana.
When it gets very confusing is when multiple conversions collide into a perfect storm of confusion.  One example of this is when we buy fuel.  The fuel is priced and sold in shillings per liter!  So first you have to convert liters to gallons and then shillings to dollars.  Uggh! 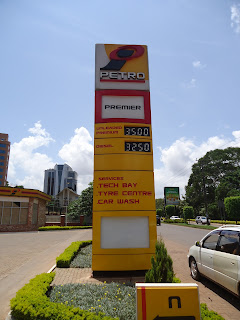 Jay tells me that this is about $6-$6.25 per gallon.  I am just glad that the price does not differ with temperature!  One thing that we have found disconcerting, in Uganda, is that people tend to tempt fate by driving with their fuel tanks near empty, all of the time.  Many times they drive our whole trip with the low fuel warning light on.  The other alarming thing, related to fuel, is that almost no one turns off their vehicle while fueling!  They just talk on their cell phone while the attendant gives them a small amount of fuel, then they take off.  Diesel is a little cheaper than gasoline here.  This is another difference from home.
One type of conversion that I can’t seem to get enough of, is the conversions of people to Jesus.  Our family has seen more people come to a saving knowledge of Jesus, in the last few weeks, then we have seen in most of our lifetimes.  We were blessed to see the production of “Heaven’s gates and hell’s flames” at Watoto, a few weeks back.  The final numbers of this week long crusade were that 50,000 people saw the production, and 10,500 people made professions of faith! 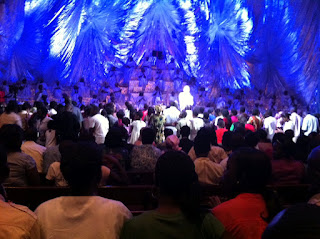 That is more than 20%!  Then we worked the Saturday clinic in Wankulukuku.  As we had reported previously, we saw 390 patients and 65 of them made professions of faith.  That is 17%!  Then, last week, we went to Namuwongo.  We saw 242 patients in 2 days and saw 41 professions of faith.  That is 17%!  I have never been one to get too caught up in “church numbers”.  In fact, I think that counting church attendance or baptisms often leads to competition between churches.  As we like to tell our kids, when they are fussing with each other, “We are on the same team”!  It is truly amazing to see the Holy Spirit at work in Uganda.  The “numbers” can’t express its power!

Jill
Posted by due unto others at 4:43 AM