This has been an incredible week for the Due Unto Others team!  You have heard a little about the week from Jill’s post regarding “Time”.  Let me start, though, with our Monday.  We joined the Africa Renewal Ministries (ARM) team at the ARM headquarters Monday morning.  We loaded several big and heavy boxes on a boat and set off across Lake Victoria to Bethany Village.  ARM has a school, orphanage and medical clinic at this location.  On Monday, we unloaded our supplies and started into a health screening program for the kids in the school.  Medical providers included myself, Dr Martin and Joseph who is a “clinical officer” (much like a PA or ARNP in the US).  We saw about 85 kids that day.  We saw several kids with Ring Worm type infections and intestinal worms but not any that were horribly sick.  We got stuck in a traffic jam on the way home and did not get home until about 7:30pm.
On Tuesday, Joline, Jessica, Joshua, and Jennifer Gash went with us as we boarded the boat at the ARM headquarters and crossed the lake again.  On this day, the clinic was opened to the Bethany village at large.  Jill, Jared and Jennifer manned the check in station, giving the patients de-worming pills, and getting their weights.  Jake and Jessica worked in the lab.  They learned quickly from the lab tech, Andrew, and by the time the day was over, they were drawing blood and looking at malaria slides under the microscope. 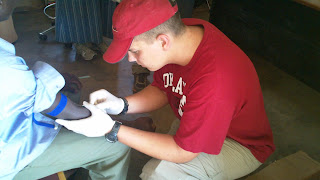 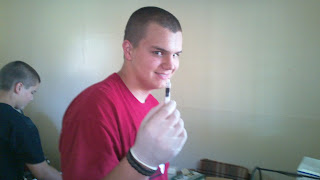 Joshua and Joline worked in the pharmacy, dispensing prescriptions to the patients with the help of Moses, one of the local nurses.  Jayne helped me a little and helped with patient flow from the exam rooms to the lab and to the pharmacy.  We saw 150 patients on Tuesday.  The sickest of these was a 35 year old lady named Jane.  She had a 104 degree fever and just looked “ill”.  My sick radar went off pretty quickly with her.  Turns out that she had a new diagnosis of HIV.  I was able to pray with her and counsel her about this, along with my new friend, Faith, from ARM.  Jane told us that she was born again, but had “grown apart” from Jesus.  She made a rededication of sorts that day and we reinforced with her that all she had to do was ask for forgiveness and it would be granted.  Jane was started on Bactrim and vitamins.  We also encouraged her to bring her children the next day to have them tested.  We were pretty tired as we headed home on Tuesday, but encouraged by the lives that we had touched and the wonderful people of Uganda who had shown us much love and appreciation.
Wednesday, our same US team boarded the boat and headed for Bethany Village.  We were a little tired from the two previous long days, so Jill needed her fix for the morning! 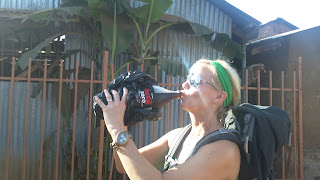 The medical provider team changed a little, as we had Dr Joy, Joseph, myself and a clinical nurse on the team.  Henry, Jim's friend that he helped to free from a remand prison here in Uganda went with us.  He is wanting to be a doctor some day and he did an excellent job serving as my translator. 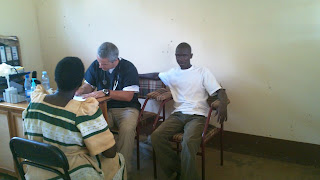 We knew that we were in for a busy day as when we arrived, the whole porch area was full of people and the line stretched out onto the grass. 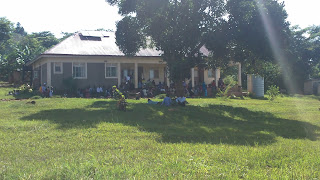 I guess the news that we were there had spread around the village over night.  Our team switched jobs a little as Jill moved to pharmacy and Jared joined Jake and Jessica in the lab.  By the end of the day, Jared (at 12 years old) was drawing blood and running lab tests under the supervision of Andrew. 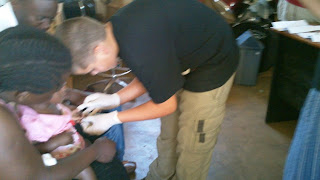 On this day, we saw about 230 patients.  Thankfully, Jane (my patient with HIV from the day before) was feeling better and all 3 of her kids tested negative for HIV.  I met 2 other ladies, Justine and Margaret, that had new diagnoses of HIV at ages 30 and 37.  I was able to pray with them and counsel them (with help from Faith again) regarding their illness.  They too were started on medicines.  I met a 10 year old boy who was very thin, but his abdomen stuck out quite a bit.  I could feel his spleen and liver with him STANDING.  For those of you not in medicine, it is very rare to feel a spleen.  Usually when you do, a person is thin, laying down and exhaling.  His liver was also enlarged, hanging about 2 inches below the edge of his ribs.  This is likely a result of malaria.  He appeared pale (noted by looking at the inside of his eyelids and lips to judge his paleness, because the dark skin is tough to differentiate).  His mom had a goiter (mass on her thyroid) that I could see across the room.  I was able to make referrals for them to head across the lake to be seen and have lab tests done at the Wentz Medical Center associated with ARM.  I was able to pray with them as well and encourage the mother to make her follow ups that were arranged.
All together, Monday-Wednesday, we had seen about 450 patients through our clinic in Bethany.  The kids had learned many new skills that will serve the Due Unto Others team as we go out to other rural areas.  We have been able to participate in the lives of 450 people, but they have made an even bigger impact on ours. 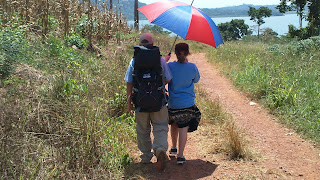 Thursday was a great day.  We slept a little later as we have not had an official “off day” since we got here on February 3rd.  The Gregstons plus Jessica Gash joined Faith to cross the lake one more time.  This time, we would come unannounced and do some home visits to people that we had seen in the clinic this week or that the local nurse knew needed some attention.   We loaded backpacks with supplies and trekked out some dirt roads to find mud huts with people living there.
The first place we went was that of a woman, Florence, with HIV.  She had not been taking her HIV meds because she had not been able to go across the lake to the city to get her medicines.  She seemed to be doing ok, but her 2 grandchildren were there.  One, named Eddy, was laying on a mat in the front of the hut and looked listless. 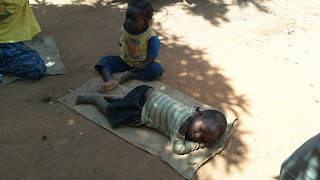 One feel of his skin, I could tell that he had a fever.  Again, looking at the inner eyelids, he seemed anemic. 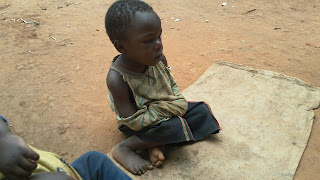 We negotiated with the local nurse, Christine, to take Eddie back with us to Gaba when we left later that day.  We knew that he needed to be checked out at the hospital and possibly get a transfusion.  Arrangements were made for Florence and Eddy to meet us for lunch and then to ride on our boat back to the Wentz Medical Center in Gaba.  We met an older lady that had fallen 1 year ago.  Since that time, she has been unable to walk. 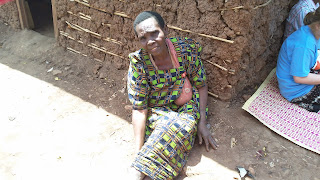 We had seen her at our clinic on Tuesday.  She gets around by dragging on her bottom and pushing with her hands.  We had hoped to bring her an “off road” wheelchair, but it was not ready to bring until tomorrow.  She will get it later next week.  Her left leg was shorter than the right and her L hip causes her chronic pain.  I am sure that she broke this hip a year ago.  She was unable to get it fixed, so she can no longer walk.  We prayed with she and her family and tried to encourage them.

We met a man named John Baptiste, who is in his 50’s, but seems to have Parkinsons.  His tremors keep him from working, so he now lives with his 17 year old son who tries to support them through fishing. 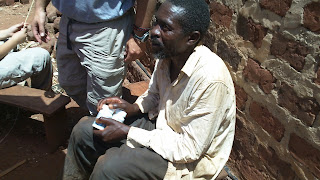 While we were visiting with John Baptiste, he accepted Christ and prayed a prayer of salvation!!

We went by to visit Jane.  She was feeling much better with her fever gone. 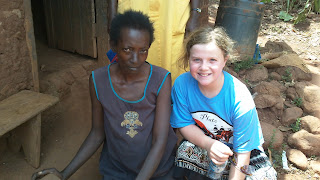 She was quite appreciative of the care she had received and was planning to start her HIV treatment in the coming week. In total, we went to 7 homes and we were able to share the love of Christ and pray with the people at each home.

After lunch, we headed back to Gaba on the boat.  Eddy and Florence did go with us. 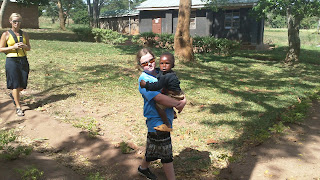 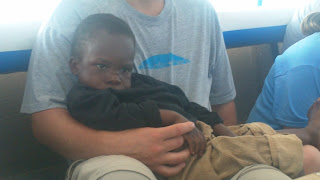 Eddy had a very high malaria count and a Hemoglobin of 6.0!  Again for the medical novice, his Hemoglobin should be 11-14.  The rule in Uganda is that you transfuse if less than 6.0!  So he did not get blood, but did stay in the hospital overnight getting IV fluids and IV malaria meds.  He will go home soon and get continued injections of malaria medicines in the clinic at Bethany Village.
This week has been exactly like what I felt God was calling us to in Uganda!  That is, helping people in the rural areas that would otherwise have no access to healthcare.  I am not sure that Jane or Eddy would have lasted much longer without some medical intervention.  Those of you supporting us in various ways, add the names of Jane, John Baptiste and Eddy to a list of people that will be giving you a big hug and thank you some day in heaven!
Jay
Posted by due unto others at 2:25 AM